All these words are slang from the 1850s having to do with the general meaning of good, right, surprising or acceptable. They're from John Russell Bartlett's "Dictionary of Americanisms" (Boston: 1859).

Quiz Answer Key and Fun Facts
1. What slang from the 1850s indicated something neither very good nor very bad, but in between?

The 1859 "Dictionary of Americanisms" indicated it could be used as "middling well," or just "middling." The author offered an example: "How are you, to-day?" "Wall, I'm pretty middlin', jest so as to be knockin' around." It was apparently used the same way in northern England. The "Online Etymology Dictionary" says it dates to the 1540s, coming from Scotland as an adjective, and the 1700s as an adverb.
2. If a sick person was getting better, what was he or she said to be? Apparently, the slang was fading everywhere except New England.

The 1859 "Dictionary of Americanisms" said it meant "lively, cheerful, in good spirits, in a comfortable state; as when one inquires about a sick person." There was an example: "...up they came, and the General looked as chirk and lively as a skipper. - Maj. Downing's Letters." The "Knickerbocker Magazine", which published literary stories out of New York, included it in an 1857 story with a boy describing himself, "Chirk and lively we both were..." so it apparently hadn't died out completely with a meaning of full of health, although the story was set in New York, not really in New England.
3. Clever had its normal meaning in the 1850s: skillful, dextrous. But what slang meaning did it also have, if you said someone was a clever fellow?

The 1859 "Dictionary of Americanisms" said that in the U. S., "clever is much used as a colloquial word in the sense of good-natured, well-disposed, honest; and the phrase 'clever man' or 'clever fellow,' is employed to denote a person of good-nature, good disposition, or good intention." The "Online Etymology Dictionary" says clever was "applied to anything a man likes" by 1755, but had entered the language with a more literal and restricted meaning a couple centuries before.
4. What did it mean in 1859 to be "sound on the goose question" or "all right on the goose," a phrase used more in Kansas and the south?


Answer: to be for slavery

The 1859 "Dictionary of Americanisms" said it was a southern phrase, meaning "to be orthodox on the slavery question, i. e. pro-slavery." The author confessed that though it was only a few years old, no older than the Kansas troubles over slavery, he was "not able to give its origin." I've not found any later researchers to do any better.

They can trace it to the mid 1850s in Bloody Kansas, and the trail goes cold, with numerous little stories, each having equal claim. The euphemistic question was apparently widespread in its day.

The editor of "The Continental Monthly" in 1862 began a short article: "Sound on the Goose Question. Who is there among our readers who has not heard that phrase?"
5. The word "likely" had its own slang meaning, besides the usual meaning of "apt." If you said a person was "likely," what did you mean to say he was?

The 1859 "Dictionary of Americanisms" said: "In the United States, as a colloquial term, respectable; worthy of esteem; sensible... a likely man is a man of good character and talents, or of good disposition or accomplishments." One sees the word often in runaway slave ads to imply the person is of good character other than this one time.

The "Online Etymology Dictionary" says the meaning of "having the appearance of being strong and capable" was from the 15th Century, but drifted toward American English only.
6. What words meant "strong" when used literally, but meant "very" when used as slang, especially in phrases like --- good or --- bad?

The 1859 "Dictionary of Americanisms" said the slang of "powerful" was "a vulgar use of the word in some parts of the country," and gave some examples: "To be sure, he's not so good a husband as he should be, but he's a powerful sight better than none." And a Georgia woman, in agreement to someone saying hoarhound and sugar were "mighty good": "Powerful good." The "Online Etymology Dictionary" says powerful was "Much used by common people in the sense of very" by the early 1800s, when other adjectives started being used the same way.
7. "Highfaluten" was already established slang in the midwest, and John Bartlett was afraid in 1859 that it "bids fair to spread over the country." What did highfaluten mean?

The 1859 "Dictionary of Americanisms" defined it as "high flown language, bombast," something that might be vaguely admired for its rhetorical flourishes, but disliked for the speaker's attempt to put on airs. The dictionary gave an example, a review of a speech in Utica, New York in 1848: "a good-looking, fat, rosy-looking man -- who got up and ground out what we term at the West a regular built fourth-of-July -- star-spangled-banner -- times-that-tried-men's-souls -- Jefferson speech, making gestures to suit the highfalutens." That seems to be an odd use as a noun.

A more natural example is what someone reported hearing in Kansas, where suspicions against strangers ran high: "One of the boys, I reckon? All right on the goose, eh? No highfaluten airs here, you know." The "National Magazine" ran an article in 1856 complaining about and parodying "high-falutin" language, and gave an example of the Lord's Prayer "high-falutinized," so instead of "Give us this day our daily bread," it was "Confer upon us during this mundane sphere's axillary revolution our diurnal sustenance."
8. If someone said, "I sold right smart of eggs this summer," what would she mean, in 1850s American slang?

According to Bartlett's 1859 "Dictionary of Americanisms," "right smart" could mean either good-sized, large, or a good deal. The example in the question is one that's given, and also: "a right smart chunk of bacon," or "Ma," says a child, "shall I toast right smart of this bread?" or, "It's a heap warmer to-day, and I'm sure we'll make right smart of corn." The usage seems odd to me, as if there's a word missing.

But that's the way Bartlett had it and apparently how it was used. In an 1855 Georgia supreme court case, a witness testified that "there was right smart of blood spilt on the floor," another real-life example supporting the usasge.
9. "La sakes" was a common expression among old women in the 1850s, and it had both a literal and figurative meaning. What were they?


Answer: literal: "for the Lord's sake!" figurative: an interjection of surprise

The 1859 "Dictionary of Americanisms" also includes "massy sakes!" and "sakes alive!" meaning "for mercy's sake" and something indecipherable, but all were used similarly to express surprise. Examples include: "La sakes! how poor she is!" and "Why, sakes alive! do tell me if Enos is as mean as all that comes to." The "Online Etymology Dictionary" dates "land's sakes" just to 1846, with land as a euphemism for lord.
10. If someone was a "screamer," what did that imply, in 1850s American midwest slang?

The 1859 "Dictionary of Americanisms" defines a screamer as "a bouncing fellow or girl." There is an example: "Mary is a screamer of a girl; I'd rather have her than all the rest." Or a man says: "just tell 'em I'm a Mississippi screamer. I can hoe more corn in a day than any Yankee machine ever invented." The word seems confined to what would be considered the west or southwest then, but is closer to the Midwest and south now: Kentucky, Mississippi.

They were places known for being only a few years from the frontier and full of quaint pioneer talk.

The "Slang Dictionary" by John Camden Hotten, written in 1864, gives another usage, saying "A performance is spoken of as either a GOOSER or a SCREAMER; should it be a failure or a great success; -- if the latter, it is not infrequently termed a HIT"
Source: Author littlepup 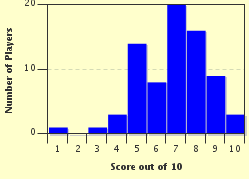