Musicals for the Young and Young at Heart Quiz

Musical theatre can be great fun. Whether you like to act, sing along with a cast recording, or go see a theatre production, here are some shows that might get your toes tapping!

Quiz Answer Key and Fun Facts
1. Do you know which musical tells of the "The Circle of Life", portraying Simba's life as he grows from cub to king?

This musical show was inspired from the Disney animated film released in 1994. The first time it appeared on stage was 1997 in Minneapolis, Minnesota. The show is famous for the pageantry, costumes and music.

The story tells the tale of Simba and how he learns to become the king.
2. Which of these musicals has two characters from Dogpatch, U.S.A., that sing "If I Had My Druthers"?

As the story unfolds Daisy Mae tries to get Abner to agree to marry her, and the townfolk learn that Dogpatch has been declared an "Unnecessary Town". Though both Abner and Daisy Mae sing "If I Had My Druthers", they want different things.

The musical was inspired by the comic strip "Li'l Abner", written and drawn by Al Capp from 1934-1977.
3. Do you know which musical tells the story of the Jellicle Cats who are introduced with "The Naming of the Cats"?

The actors performing "Cats" are dressed in costumes to resemble cats. The musical was inspired by T. S. Eliot's "Old Possum's Book of Practical Cats", a collection of poems published in 1939. The poems were originally sent in various letters from T. S. Eliot to his godchildren.
4. Do you know which of these musicals is about a young boy who sings "The Kite" as he tries and then succeeds in getting his kite to fly, at least until it flies into the Kite-eating Tree?

Charles Schulz began publishing the comic "Peanuts" in 1950, and during the 1960s Clark Gessner began writing songs based on those characters: Charlie Brown, Snoopy, Schroeder, Lucy and Linus van Pelt, and many others. The songs were combined into a musical which was first produced in 1967.

During the song "The Kite", Charlie Brown is coaching himself on how to get the kite into the air, and then rejoices because it's flying, at least until it hits the tree.
5. One of these musicals tells the story of "Shy" Princess Winnifred and Prince Dauntless. Do you know which one?


Answer: Once Upon a Mattress

Inspired by "The Princess and the Pea", a fairy tale by Hans Christian Andersen, this musical tells a comical tale of a prince and princess who want to marry, even though the queen wants her son to stay a boy forever.

The musical was first produced in 1958, with Carol Burnett playing the role of Winnifred.
6. Which musical was named for an orphan who always believed that things would be better "Tomorrow"?

The musical "Annie" was based on the stories told in the comic strip "Little Orphan Annie" by Harold Gray which was published from 1924-2010.

During the musical Annie is selected to stay for the Christmas holiday in Oliver Warbucks' mansion, and Warbucks attempts to find Annie's parents for her.
7. Do you know in which musical the newspaper boys in New York City sing "Seize the Day" as they prepare to strike when the cost of the newspaper is increased?

The idea for this musical came from a real strike known as the Newsboys Strike of 1899. The newsboys, or newsies, who sold the papers didn't work for the company, but had to purchase the papers from them and then try to sell what they had bought.

The song "Seize the Day" encourages the newsies to strike with the lyrics "Now is the time to seize the day, send out the call and join the fray".

This show was first produced as a Disney movie in 1992, and then produced as a theatre show which opened in 2011.
8. In which of these musicals does Maria, hired as a governess, use the song "Do-Re-Mi" to teach her charges to sing?

The story is about Maria Ranier who goes to work for Captain von Trapp as governess to his seven children: Liesl, Friedrich, Brigitta, Kurt, Louisa, Marta and Gretel.

Maria teaches the children to sing "Do-Re-Mi" as a way to learn the notes of the music scale, singing "When you know the notes to sing, you can sing most anything".

The show was first seen on Broadway in 1959 with Mary Martin starring as Maria. In 1965 it was released as a movie with Julie Andrews starring as Maria.
9. Can you identify the musical named for a five year old girl who sings "Naughty", telling us that she believes "Even if you're little, you can do a lot, you mustn't let a little thing like, 'little' stop you"?

"Matilda" started as a novel written by Roald Dahl, which was published in 1988. A movie was made from the book in 1996, and this musical, which premiered in 2010, was created from the same inspiration.

Matilda is smart and overcomes many obstacles to find happiness.
10. Do you know which of these musicals is about a boy who lives in Never Land and claims "I Won't Grow Up"?

J. M. Barrie created a play called "Peter Pan" in 1904 and then made a novel from it called "Peter and Wendy". The show "Peter Pan" that appeared on Broadway in 1954 with Mary Martin playing the part of Peter, was based on the works by Barrie.

Peter teaches Wendy, Michael and John Darling to fly and takes them to Never Land to live with the lost boys. The Darlings eventually return home, waiting for Peter to return.
Source: Author mlcmlc 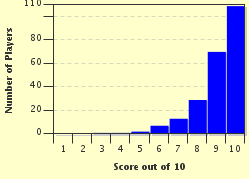 Related Quizzes
This quiz is part of series Musically 1:

Part 1: Quizzes inspired by musicals of film or theatre