A multiple-choice quiz by whatever111. Estimated time: 5 mins.

Quiz Answer Key and Fun Facts
1. Who said: 'Well, you beautiful, bad-tempered thorn in my flesh'?

2. Who said: 'I feel an almost overwhelming interest in the methods of daylight abduction employed by the modern youth.'?

Justin Alastair, Duke of Avon is talking to Mary Challoner about Dominic Alastair abducting her in 'Devil's Cub.'
3. Who said: 'A wealthy fribble, three parts idiot, and the fourth - never mind'?

The Duke of Salford talking to his mother about Sir Nugent Fotherby in 'Sylvester.'
4. Who said: 'There is a corpse somewhere on the road to town. Mr. Fox does not want it there. Remove it.'?

The Marquis of Vidal talking to one of the footmen at Lady Montague's drum about a footpad he shot in 'Devil's Cub.'
5. Who said: '...what do you mean by hugging and kissing me wife under me very eyes'?

Miles O'Hara talking to Jack Carstares in 'The Black Moth.'
6. 'My dear young greenhead,'said ---, with a touch of asperity, 'one can discover that a female is a dead bore in less than two hours!' Who is ---?

Wilfred Steane to Viscount Desford's younger brother Simon Carrington, about the possiblility of Desford having cast Cherry Steane off in 'Charity Girl'.
7. Who said: 'Now tell me, do my eyes deceive me, or is there a suggestion - the merest hint - of a - really, I fear I must call it a bagginess - about the ankle'?

8. Who said: 'If someone would have the good-sense to inform me whether I am assisting at a tragedy or a farce I should be grateful'?

Jack Westruther addressing the company just after the arrival of Freddy Standen on the scene when Dolph tried to hide again in 'Cotillion'.
9. Who said: 'If you can contrive to come out of what would appear to be a catalepsy, assemble the few wits God gave you and attend to me, I trust I may be able to allay your brotherly anxiety'?

Sir Gareth Ludlow talking to Lady Hester Theale's brother in 'Sprig Muslin'.
10. Who said: 'I hesitate to wound you...but the spectacle of a woman of your name, birth, and tradition, cold-bloodedly offering herself to the highest bidder is not one calculated to impress the world with a very strong notion of her pride'?

Sir Richard Wyndham to his prospective fiancee in 'The Corinthian'.
Source: Author whatever111 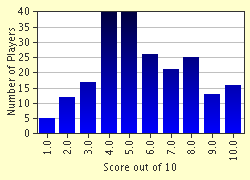 
Other Destinations
Explore Other Quizzes by whatever111