Questions are about secrets and mysteries in Heyer's Regency and Georgian romance novels.

Quiz Answer Key and Fun Facts
1. In "Sylvester or The Wicked Uncle", Phoebe Marlow does something unforgivable to the Duke of Salford. What does she do?


Answer: She writes a book featuring a parody of him as the villain Count Ugolino

After an unsuccessful London season, Phoebe writes a satirical novel featuring recognizable characters from London's high society. The villain is Count Ugolino, based on Sylvester, Duke of Salford, whom she dislikes for his arrogance. When he unexpectedly comes to court her, she runs away from home with her neighbor, Tom.
2. In "April Lady", Nell tries desperately to keep her husband, Lord Cardross, from finding out what she has done. What secret is she keeping from her husband?


Answer: She has lent money to her brother, Dysart

Nell has lent money, against her husband's orders, to her brother. In order to pay off a debt to her dressmaker and keep her loan to her brother a secret, she tries to find the money, enlisting her brother's aid. Her sister-in-law, Letitia, takes and sells the necklace. Felix is her friend and admirer, nothing more.
3. When Max Ravenscar insults Deborah Grantham, in "Faro's Daughter", she determines to get revenge. How does she go about it?


Answer: She pretends to be a vulgar fortune hunter who intends to marry his young cousin

Deb has no intention of marrying Max's cousin, Adrian, although he has proposed to her. When Max attempts to buy her off, she is incensed, and determines to punish him by apparently driving up the price. Max, meanwhile, determines that she shall not have his cousin or any money. Deb takes in Phoebe Laxton, a young girl pursued by a notorious libertine. Arabella is taken with Lucius, a friend of Deb's, but doesn't elope with him after all, and Deb doesn't know of the planned elopement until Lucius leaves her a note saying he has gone off with Arabella. Max wins when he plays cards with Deb.
4. After the untimely deaths of his eldest son and grandson, Lord Daracott is forced to send for his grandson Hugo, now his heir. Hugo's father was a black sheep second son who ran away and married beneath him. Hugo, "The Unknown Ajax", conceals something significant from Lord Daracott and his new-found family. What's his guilty secret?

The Daracott family expects that Hugo will be an uncouth, unlettered rustic. Taken aback by their coldness, Hugo speaks broad Yorkshire, and plays to their worst fears. In fact, his mother was the daughter of a wealthy mill owner, and, as his maternal grandfather's heir, he is a very wealthy man.

When Lord Daracott finds out, he is furious that his heir is not dependent on him as he had expected. Hugo's young cousin, Richmond, is the head of the smuggling ring. Hugo was "transported," but as a soldier, not a convict. Amelia is a figment of his imagination, invented to tease his cousin Anthea, whom his grandfather Darracott intends him to wed.
5. When Sir Waldo Hawkridge, in "The Nonesuch", comes to settle the estate left him by the reclusive Mr. Calver, he meets Miss Ancilla Trent, governess to the beautiful Tiffany Wield. What secret does he conceal from her?


Answer: That he intends to use the Calver house as an orphanage

Sir Waldo stays for some time in the neighborhood, with two of his young cousins. He keeps his intentions for the house a secret, not wanting to upset the local gentry. One of his cousins refers to Waldo's "wretched brats", which Ancilla assumes to mean his illegitimate children. Sir Waldo is quite wealthy and unattached.
6. In "Venetia", orphaned Venetia Lanyon lives on her late father's country estate with her younger brother Aubrey. What family scandal is kept from her?


Answer: Her parents were divorced and her mother is still alive

Although Venetia believes her mother to be dead, she sees her at the opera in London, and finds out that her parents are divorced and her mother, still a great beauty, is married to a second husband, and not received in polite society. Venetia's father died of natural causes and her brother marries a girl with little fortune. Venetia is never engaged to Edward, although he hopes to marry her.
7. Prudence and Robin Merriot have plenty of secrets, each posing as a member of the opposite sex, under assumed names, and in hiding after the recent Jacobite rebellion. However, it is their father's secret which is revealed near the end of "The Masqueraders". What has "the old gentleman" been hiding?


Answer: He is really the Viscount Barham

"The old gentleman", as Prudence and Robin call their father, has always been something of a mystery to them. When he comes to London, claiming to be the heir to the late Viscount Barham, they assume it is a scam, but he proves his claim at the end. Robin kills Markham in a duel. "The old gentleman" has run a gaming house in more than one European city.
8. When the wealthy Matthhew Penicuik makes his ward Kitty Charing his heiress, in "Cotillion", contingent on her marrying one of his great-nephews, what must she conceal from everyone?


Answer: That she and Freddy Standen are only pretending to be engaged

Kitty has a crush on Jack, who does not attend his great-uncle's summoning of all his great-nephews. She begs Freddy to pretend to be engaged to her so that she can go to London for a season. Kind-hearted Freddy agrees and takes her to London for a visit with his family. Kitty's parents are dead, although her mother was French and she has a French cousin, Camille, who is in England on dubious business. Dolph is in love with another lady.
9. Traveling to London, in "Arabella", for a season with her godmother, Arabella takes shelter with Mr. Beaumaris when her carriage breaks down. Taking umbrage at overhearing some of his remarks, she decides to misrepresent herself by telling him what?


Answer: She is a great heiress

Mr. Beaumaris assumes that Arabella is a husband hunter when she shows up at his doorstep. Affronted, she pretends to be heiress to a large fortune, rather than the daughter of a country parson.
10. One of the Fancot twins substitutes for his brother, the Earl of Denville, who has disappeared. The masquerade continues as the earl fails to return home. What indiscretion of their mother's did the earl set off to right?


Answer: She lost a ruby brooch, staked while gambling

The earl believes the brooch to be a paste copy, and sets off to redeem it before this is discovered. He has an accident and disappears for some time. Meanwhile his brother, Kit, comes home unexpectedly and substitutes for him. Their mother is a widow and doesn't elope with anyone.
Source: Author bexze 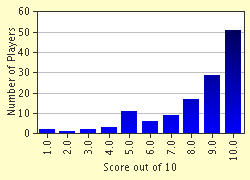 
Other Destinations
Explore Other Quizzes by bexze