The 'Alastair' trilogy is said to be made up of 'three of Georgette Heyer's most beloved tales of love, intrigue and adventure'. Sounds about right to me - this quiz is about the first book 'These Old Shades'.

Quiz Answer Key and Fun Facts
1. What is the Christian (first) name of the Duke of Avon?

Although 'Alastair' is the family name, the title Justin Alastair inherited was the Dukedom of Avon.
He answers to several names throughout the book - 'Justin' 'Avon','Satanas', and, of course, 'Monseigneur'.
2. Leon had very distinctive colouring which led his grace of Avon to suspect that he was not what he seemed. What was so unusual?

The Duke perceived the familial resemblance between Leon, later Leonie, and one of his bitterest enemies, the Comte de Saint-Vire.
There was bad blood between the Duke and the Comte which stemmed from the Comte's insulting refusal to allow Avon to marry his sister many years before the story takes place.
3. Where did the Duke of Avon and Leon first meet?


Answer: A back-alley in Paris

How 'Monseigneur' managed to spot the family resemblance between Leon and the Comte de Saint-Vire in dim light and (presumably) after a few glasses of wine is a mystery to me, but I'm not complaining - it was the start of a wonderful romance!
4. What are the names of the Duke of Avon's brother and sister?

Their full titles are Lord Rupert Alastair and Lady Fanny Marling.
5. What is the name of the Duke of Avon's friend who believes he is the only person to have guessed that 'Leon' is actually 'Leonie'?

In Chapter 8, when Hugh, believing that the Duke is still under the impression that Leonie is a boy, asks to be given 'him' with a view to protecting 'her', he is very put out to discover that Avon knew it all along and has very respectable plans for her future.
6. What name does Leonie adopt when she becomes the Duke of Avon's ward?

At this point most of the other characters believe that Leonie is the illegitimate daughter of the Comte de Saint-Vire - but Avon, having seen St-Vire's so-called 'son', knows better!
7. Who abducts Leonie from England?

In an exciting couple of chapters, Leonie is abducted by the Comte, Lord Rupert 'acquires' a horse and rides off in pursuit, selling the horse to pay his passage to France and continuing his rescue attempt which proves successful when the Comte's carriage suffers an accident and Leonie, who has been feigning being still unconscious after being drugged, manages to escape and is at last rescued by Rupert.
8. Why does the Comte de Saint-Vire believe that his duplicity will never be discovered?


Answer: Leonie disappears from Paris when she fears that rumours will begin to circulate that she is the baseborn daughter of Saint-Vire.

Leonie runs away after she becomes aware of whispers about her possible parentage and secretly visits Saint-Vire to ask him if she is truly his illegitimate daughter. Her naive question and obvious devotion to Avon makes him see that he can use her love to protect himself. Telling her that she is indeed his baseborn child, he goes on to suggest that her continuing presence in Paris will cause a scandal and lead to the social ruin of the Duke of Avon.
The irony is that Avon has always been a rake and has no reputation to ruin. He is also too rich and powerful to be touched by any breath of scandal; Leonie is the only person who believes him to be a 'gilded saint'.
Well, she is only nineteen and deeply in love.
9. What happens at the conclusion of the Duke of Avon's allegorical 'story' which he tells at the salon of Madame du Deffand, and which hints that Leonie has not just disappeared, but has actually committed suicide?


Answer: Madame de Saint-Vire becomes hysterical and blurts out the truth that she is Leonie's mother, the Comte shoots himself.

This is an excellent chapter, very cleverly written and very moving, especially the first time the story is read and one doesn't know how things will turn out.
10. At the reunion, what does the Duke say to Leonie at the conclusion of the conversation when she refuses to be restored to her mother, Madame de Saint-Vire, and her Uncle Armand and asks him if he doesn't love her?


Answer: "Leonie, you would do well to consider. You are not the first woman in my life"

I think that question was a little too easy since most devotees of the story can recite it by heart, along with Leonie's response, "Monseigneur, I would so much rather be the last woman than the first."

I hope you enjoyed doing my quiz - please let me know what you thought and help to inspire me to make a quiz on 'Devil's Cub' next!
Source: Author Lucia-pazza 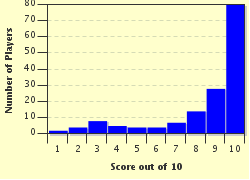 
Other Destinations
Explore Other Quizzes by Lucia-pazza