This quiz is about the names Tarzan uses for animals in the books written by Edgar Rice Burroughs.

Share on Facebook
Share on Twitter
Share by E-Mail
Author
lionman
Time
3 mins
Type
Multiple Choice
Quiz #
150,484
Updated
Dec 03 21
# Qns
15
Difficulty
Average
Avg Score
9 / 15
Plays
683
This quiz has 2 formats: you can play it as a or as shown below.
Scroll down to the bottom for the answer key.

Quiz Answer Key and Fun Facts
1. What does Tarzan call a male lion?

One of the most powerful of Tarzan's jungle foes, Numa is feared by all the animals except tantor.
2. What does Tarzan call a crocodile?

Most crocodiles live up to 80 years of age and can grow up to 20 feet in length.
3. What does Tarzan call a baby?

4. What does Tarzan call a rhinocerous?

The rhinocerous is a large mean tempered land mammal. The horns are made of matted hair and kept sharp by rubbing them on trees or rocks.
5. What does Tarzan call a Gorilla?

Gorillas have been made out to be fierce and dangerous animals, but are very peaceful unless provoked.
6. What does Tarzan call a Leopard?

Leopards are very secretive creatures, hunting mostly at night.
7. What does Tarzan call a Zebra?

The baby zebra's brain is like a sponge and the mother keeps it from seeing other zebra patterns except hers by blocking them with her body.
8. What does Tarzan call a female lion?

The female lion does most of the hunting for the pride.
9. What does Tarzan call a Native African?

A native warrior of Africa killed Kala, Tarzan's ape foster mother. Tarzan went after him for revenge.
10. What part of Africa is Tarzan From?

Tarzan's parents were deserted by the mutinous crew of their ship. They were killed by Kerchak the king ape.
11. What does Tarzan call a Monkey?

Tarzan had a little monkey named Nikema who traveled everywhere with him.
12. Who is Tarzan's Cousin?

Cecil Clayton was usually portrayed as a bad person in the movies. He was in reality a good guy.
13. Who is Jane Porter's Father?

Jane's father was looking for buried treasure when he met Tarzan.
14. Who is Tarzan's Foster Mother?

Kala taught Tarzan how to live in the jungle after Kerchak killed his parents.
15. What does Tarzan call a Great Ape?

Tarzan became King of the apes after killing Kerchak the great ape, during a battle for Jane Porter.
Source: Author lionman

This quiz was reviewed by FunTrivia editor agony before going online.
Any errors found in FunTrivia content are routinely corrected through our feedback system.
Most Recent Scores
Jan 05 2023 : Guest 49: 5/15
Dec 29 2022 : Guest 172: 9/15 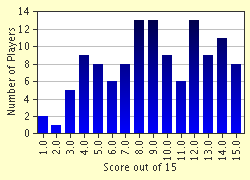 
Other Destinations
Explore Other Quizzes by lionman