"The Mysterious Affair at Styles" Quiz

Here's where it all began; Agatha Christie's debut as a mystery writer and the birth of Hercule Poirot. Be warned- the solution is revealed! Good Luck!

Quiz Answer Key and Fun Facts
1. How much did Christie eventually make from this novel?

Christie's first novel sold about 2000 copies, which was not bad for a novice author, but she got only the meager sum of 25 pounds for it- not from royalties, but from the serial rights which had been sold to "The Weekly Times" for 50 pounds. Christie, understandably, found this amount rather paltry and was rather discouraged, though not enough to stop writing, fortunately.
2. What key word is consistently misspelled in the original edition of the book?

At the insistence of one Miss Howse, the spelling editor at Bodley Head Books, cocoa was spelled "coco" (as in Coco Chanel) throughout the novel. Christie argued the point with her, producing dictionaries and tins of cocoa, but Miss Howse, who had become rather intractable with age, held firm.
3. The book is narrated by Captain Hastings, a friend of John Cavendish. What does he tell Mary Cavendish (John's wife) he has a secret hankering to be?

It is here that Hastings mentions a Belgian fellow he once knew (Poirot, of course)- "A funny little man, a great dandy, but wonderfully clever". Hastings says that his system is based on Poirot's, "though, of course, I have progressed rather further." Really, now?!
4. Which of the following is true of Mary Cavendish?


Answer: Her mother was Russian

Late in the novel, Mary describes to Hastings her childhood; her father had been English, but her mother was Russian and died (apparently of an accidental overdose) when Mary was quite young.
5. Two people are observed to shed tears for the murdered Emily Inglethorpe. Who are they?

Poirot observes, upon speaking to Evelyn after the murder, that "in all this house of mourning, yours are the only eyes that have wept" (Crocodile tears, as it turns out.). Hastings observes that Poirot sheds tears (real ones this time) when resolving to bring Emily's murderer(s) to justice to repay her kind hospitality to himself and his fellow Belgian refugees.
6. What two things are of primary significance to Poirot about the day of the murder?


Answer: The temperature and the distinctive appearance of Alfred Inglethorpe

The thermometer on the day of the murder registered 80 degrees in the shade- yet Emily had ordered a fire to be lit in her room! (she needed to burn a will). Alfred Inglethorpe's distinctive appearance, Poirot realized, would have made it easy for someone to impersonate him at the chemist's, using a fake black beard, glasses, and wearing Inglethorpe's rather peculiar clothes.
7. Poirot finds a crumpled piece of paper in the wastebasket of Emily's boudoir, on which is written "Posessed/I am posessed/he is possessed/I am possessed/ possessed" What single thing about this is significant to him?


Answer: The different spellings of the word "possessed"

Poirot notices that "possessed" is spelled first one way, and then another. He deduces that Emily was making a new will and was unsure of the spelling of this key word. (Hastings, on the other hand, wonders if Emily believed herself demonically possesed and, perhaps, commited suicide!)
8. Why is Poirot determined that Alfred Inglethorpe shall not be arrested for the murder?


Answer: Because he will be found innocent

Alfred Inglethorpe had an airtight alibi for the day he allegedly visited the chemist's shop and the night of the murder. If he had been arrested and put on trial, he would have produced this alibi and been released. It would then have been impossible to convict him for the murder later, since one cannot be tried twice for the same crime (double jeopardy).

This is why Inglethorpe seemed determined to get himself arrested; Poirot was as determined that he should not be arrested for the murder- yet.
9. When Cynthia Murdoch confides to Hastings her concern for her uncertain future after Emily's death, what does Hastings do?


Answer: Asks her to marry him

Cynthia is concerned because she was not provided for in Emily's will, as she was assured she would be. She believes that Mary Cavendish dislikes her, that Lawrence is indifferent to her, and that neither one wants her around. She then breaks down and cries, prompting Hastings to impulsively (and astonishingly) propose marriage to her. Cynthia finds this terribly amusing and goes away laughing, much to Hasting's chagrin. (Hastings will propose again, more successfully, to another beautiful girl in the next Poirot novel, "Murder on the Links")
10. Why did Lawrence crush the cup on the floor of the dead woman's room almost to powder?


Answer: Because he thought Cynthia had poisoned Emily

The sharp-eyed Poirot noted that a broken cup and a broken lamp chimney lay on the floor of the dead woman's room. The lamp chimney was broken in two, but the cup had been ground almost to powder. This was done by Lawrence, who believed that Cynthia (whom he loved) was involved, since he had seen the communicating door to her room unbolted.
11. Whom does Evelyn Howard attempt to implicate in the murder?

Evelyn Howard plays her part quite shrewdly; hoping that Poirot will see through her hysterical conviction of Alfred Inglethorpe's guilt, in spite of his alibi, she pretends that her determination to believe Alfred guilty is willful self-deception on her part to blind herself to the greater probability of John Cavendish being the murderer.
12. What strikes Hastings as notable about Evelyn Howard's behavior, though he does not realize its true significance?

Hastings realizes, as does Poirot, that Evelyn's hatred of Inglethorpe is unnaturally violent and hysterical. Hastings even considers the possibility that she tried to poison Inglethorpe and Mrs. Inglethorpe got it by mistake, a theory which even he rejects as absurd.

However, Poirot draws the correct conclusion- that Miss Howard's vehemence is feigned as a cover for feelings that are entirely different in nature.
13. Which of the following is true of Evelyn Howard and Alfred Inglethorp's relationship?


Answer: They are cousins

Evelyn Howard and Alfred Inglethorpe are indeed cousins, a fact Poirot learns from Dorcas. This makes their relationship revolting to an even greater degree.
14. This novel introduces both Poirot and Hastings. Which other fixture of the Poirot mysteries is introduced here?

Japp appears in chapter VII, where he meets Poirot and they reminisce about their involvement in the Abercrombie forgery case in 1904. As will always be the case in their future collaborations, Poirot runs rings around the stolid and unimaginative Japp.
15. Who impersonated Alfred Inglethorpe at the druggists?

Evelyn, with her mannish appearance and deep voice, disguised herself and impersonated Alfred Inglethorpe while the latter was establishing a solid alibi.
16. The mysterious Dr. Bauerstein, although he does not turn out to be the murderer, nonetheless does turn out to be a criminal. What is his crime?

Three quarters of the way through the novel, Japp arrests the German-born Bauerstein for espionage. Bauerstein serves as an effective red herring in this book.
17. What causes Poirot to realize that the incriminating letter written by Alfred to Evelyn was in the spill vases on the mantelpiece?


Answer: The fact that he had to straighten the objects on the mantle twice

After the shock of discovering that the lock of Emily's despatch case had been forced, Hastings noticed that Poirot's hands shook as he mechanically straightened the spill vases on the mantle. When he recalls this to Poirot later in the novel, Poirot recalls that he had previously straightened those same vases; ergo they must have been disarranged by someone in the interim.
18. In addition to the strychnine, Emily Inglethorpe (along with Cynthia) was given a mild narcotic to induce deep sleep on the night of her death. Who drugged Emily and Cynthia?

Mary beleived that Emily was concealing evidence of John's infidelity, so she determined to search Emily's room on the murder night. She put a mild but effective narcotic in Emily's cocoa and also Cynthia's coffee, since she would have to enter Emily's room through Cynthia's room.

The narcotic delayed the effect of the strychnine. When Emily died and people began to talk of poison, Mary was devastated, thinking that she had inadvertantly poisoned Emily. She was greatly relieved when it was determined that Emily had died of strychnine, not narcotic poisoning.
19. Christie's knowledge of poisons would never be put to better use than in this, her first mystery. How was Emily Inglethorpe poisoned?


Answer: A bromide powder was added to her medication

The medicine Emily was taking contained some strychnine; the addition of a bromide powder caused the precipitation of the strychnine to the bottom of the bottle. The trusted Evelyn always poured out Emily's medicine and was careful never to shake the bottle, so that Emily ended up ingesting all of the strychnine in the final dose. Brilliant!
20. Why did Poirot want John Cavendish to go on trial for the murder of Emily Inglethorpe?


Answer: Because it would bring him and his wife closer

Here, Poirot actually plays Cupid; the Cavendishes' marriage had been a loveless one, at least on Mary's part. However, she came to love her husband but he failed to perceive this and did not want to force himself on her, causing her to beleive that he had fallen out of love with her, etc., etc. With his brief attraction to Mrs. Raikes, they grew even further apart.

When the police came to suspect John, Poirot could have prevented his arrest, but, knowing that the murder trial would bring the Cavendishes closer together, decided "in favor of a woman's happiness". (Fortunately, he is able to prove the true culprits' guilt).
Source: Author jouen58 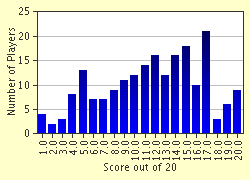 
Other Destinations
Explore Other Quizzes by jouen58