Who is Jane Marple? Trivia Quiz

You know Miss Marple? Ten questions about her!

Quiz Answer Key and Fun Facts
1. Between which years was Miss Marple likely to have been born?

It can be worked out using the information in "They Do It with Mirrors" in which Carrie Louise Serrocold, Miss Marple's friend in Florence, appears (they must have "similar" ages). Mildred was born when Carrie was 17 years old. In 1934, Mildred married at 40 years of age and Carrie Louise was between 55 and 60 years.
2. What was Miss Marple's hair color when she was young?

This fact is mentioned in "They Do It with Mirrors".
3. Miss Marple is a very religious person. To which Christian Church does she belong?

"Send that Marple woman back," Miss Ramsbottom called after him. "She's frivolous, like all Church of England people, but she knows how to run a charity in a sensible way" (from "A pocketful of Rye"). Jane Marple is Anglican and Hercule Poirot is Catholic.
4. Miss Marple talks frequently about her nephew who is a novelist. What is his name?

Raymond West is the son of Miss Marple's sister. Agatha Christie never specified her name or wrote about her. Dermot Craddock is Henry Clithering's godson. Raymond Starr appears in "The Body in the Library".
5. Miss Marple always mentioned Raymond West in the novels in which she appeared.

The name Raymond West didn't appears in "The Moving Finger" or "A Pocketful of Rye".
6. Miss Marple lives in Saint Mary Mead, but it is known that she travels out of England to another country. Which one?

Miss Jane Marple goes to school in Florence with the North American sisters, Ruth and Carrie Louise, and she also goes to St. Honore island (in the West Indies) in "A Caribbean Mystery".
7. Many of Poirot's novels are linked with nursery rhymes. Which of the following Miss Marple titles has a similar relationship?


Answer: "A Pocketful of Rye"

"Sing a sixpence song, a pocketful of rye ..." is the nursery rhyme in this novel.
8. Chronologically, when does "Sleeping Murder" occur?


Answer: Between "The Moving Finger" and "The Mirror Cracked from Side to Side"

In this book, Inspector Last remembers the Lymstock case and Colonel Bantry is alive (he died before "The Mirror Cracked from Side to Side").
9. Who lives with Miss Marple in her last years?

In the "The Mirror Cracked from Side to Side", Miss Marple lives with Miss Knight, and Jim and Cherry Baker offers to live with her (Jane Marple). Cherry is already mentioned in "Nemesis". David Baker appears in "Third Girl" and Lucy Eyelesbarrow in "4:50 to Paddington".
10. In "Nemesis", Miss Marple says she likes opera. Has Jane Marple ever been to the opera?

In "They Do It with Mirrors", she mentioned that she and Carrie Louise went to the opera in Convent Garden in 1928.
Source: Author Sosias 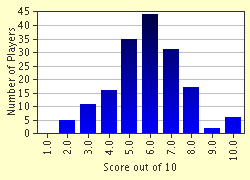 
Other Destinations
Explore Other Quizzes by Sosias