Can you guess which actor or actress appeared in the films listed in the quiz? ** May contain spoilers **

All the four movies were produced by Dharma Productions, which is now owned by Karan Johar. Out of the four films, only "Kal Ho Na Ho" was directed by Nikhil Advani and the rest were directed by Karan Johar.
Shahrukh Khan, one of the most popular actors in Bollywood, starred in all the four films. A personal friend of Karan Johar, Shahrukh Khan has been the lead actor in all of Johar's films.
2. "Maine Pyaar Kiya", "Hum Aapke Hain Koun", "Hum Saath Saath Hain" and "Vivaah" were family dramas directed by Sooraj Barjatya. Which of the following actors or actresses appeared in all four films?

Mohnish Behl appeared in these four Rajshri Production films. Along with Mohnish Behl, Alok Nath also appeared in these four films.
Mohnish Behl had substantial roles in three of these films. He played the antagonist in "Maine Pyaar Kiya", an elder brother in both "Hum Aapke Hain Koun" and "Hum Saath Saath Hain". He made a guest appearance in "Vivaah" as a doctor.
3. The films "Saajan", "Hum Dil De Chuke Sanam", "Kuch Kuch Hota Hain", "Mujshe Shaadi Karogi" and "Jaan-e-man" were all love triangles. Which of the following actors or actresses appeared in these five films?

Salman Khan is known as the seventh most handsome man in the world and is usually known to potray a mixture of 'chocolate-box' lover and 'action' hero in most of his films. Out of the films listed, Salman lost his lady love to Sanjay Dutt ("Saajan"), Ajay Devgan ("Hum Dil De Chuke Sanam") and Shahrukh Khan ("Kuch Kuch Hota Hain").

In both "Mujshe Shaadi Karogi" and "Jaan-e-man", Salman defeated the other contender, Akshay Kumar, to win the girl.
4. "Baazigar", "Gupt", "Dushman" and "Fanaa" were all thrillers. Which of the following actors or actresses appeared in these four films?

One of the most popular actresses in Indian cinema, Kajol hunted down her sister's murderer in both "Baazigar" and "Dushman". She played a murderer in "Gupt" and the wife of a militant in "Fanaa".
5. Amitabh Bachchan and Abhishek Bachchan appeared in the films "Bunty aur Babli", "Kabhi Alvida Na Kehna", and "Sarkar".

In "Kabhi Alvida Na Kehna" and "Sarkar", real life father (Amitabh) and son (Abhishek) played father and son on screen. In "Bunty aur Babli", Amitabh played a cop trying to catch the conman, played by Abhishek.
6. "Kaal", "Zinda", "Taxi No 9211", "Dhoom" and "Kabul Express" were films where a love story was not the main plot. Which of the following actors or actresses appeared in all these five films?

A model, John Abraham has made a successful career as an actor in Bollywood. "Kaal" was a thriller based inside a jungle, as was "Zinda", where John played the antagonist. "Taxi No 9211" and "Dhoom" were adventures. "Kabul Express" was set in war torn Afghanistan where John played a journalist.
7. The movies "Hum Tum", "Parineeta", "Salaam Namaste", "Being Cyrus", "Omkara" and "Eklavya" proved that this star had "come of age". Which one of the following was this star?

Saif Ali Khan made his debut in 1992 with "Parampara". His earlier films were disappointing but he proved to be a good supporting actor in films like "Hum Saath Saath Hain", "Dil Chahta Hain" and "Kal Ho Na Ho". Saif's breakthrough film was "Hum Tum" where he proved that he could be the lead actor.

He proved his mettle as an actor in "Parineeta" and "Omkara". He co-starred with Sanjay Dutt Vidya Balan and Raima Sen in "Parineeta" and "Eklavya", both produced by Vidhu Vinod Chopra.
8. Which of the following actors appeared in the comedies "Munnabhai MBBS", "Anthony Kaun Hai", "Lage Raho Munnabhai" and "Golmaal"?

Arshad Warsi, Sanjay Dutt, Jimmy Shergill and Boman Irani acted in the two "Munnabhai" movies, which were directed by Rajkumar Hirani. Arshad Warsi and Sanjay Dutt appeared together in "Anthony Kaun Hai". Arshad appeared along with three other actors in the comedy "Golmaal".
9. "Mangal Pandey", "Rang De Basanti" and "Fanaa" were comeback movies for which of the following actors?

Aamir Khan starred in two highly acclaimed movies "Dil Chahta Hain" and "Lagaan" in 2001. "Lagaan" earned a Best Foreign Picture nomination at the 2002 Oscars. Aamir Khan came back in 2005 after a four year hiatus, with "Mangal Pandey". In 2006 "Rang De Basanti" and "Fanaa" became two of the biggest hits of the year.
10. Does Rani Mukherjee play the lead actress in the films "Hum Tum", "Veer-Zaara", "Paheli", "Black" and "Bunti aur Babli"?

Rani played the lead actress in "Hum Tum", "Paheli", "Black" and "Bunti Aur Babli" but not in "Veer-Zaara". In "Veer-Zaara", Rani was part of the supporting cast and was a Pakistani lawyer who united the main lead pair of Shahrukh Khan and Preity Zinta in the film.
Source: Author ff501998 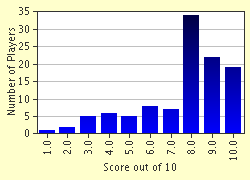 
Other Destinations
Explore Other Quizzes by ff501998