This quiz is about various Hindi/Indian movies. Any questions, comments, concerns?

In "Sholay", Hema Malini played Basanti who drove a "tanga". Basanti used Dhano to pull her "tanga". Dhano was a white, female horse which was a constant source of transport throughout the film. Dhano "listened" to Basanti's feelings and emotions throughout the film.
3. What was the name of the alien in "Koi Mil Gaya"?

The alien's name was Jadoo. Rohit, a retarded man, befriended Jadoo and received powers to make him well. Jadoo was a short, blue, human-like alien who protected Rohit and gave him powers to enable him to return to normal.
4. What was the name of the lead 'bad-guy' in "Dhoom"?

Kabir was played by John Abraham in "Dhoom". In the movie, John/Kabir used motorcycles to get away after looting places. He was a quiet man with long hair, who was a genius in thefts. The character was somewhat like Danny Ocean from "Ocean's Eleven". He designed all plans for the thefts.
5. What was Ramprasad Sharma's military rank in the movie "Main hoon Na"?

Shah Rukh Khan played Ramprasad Sharma as a major. In the movie, he went to college to protect the daughter of India's General. The major was to protect the general's daughter by impersonating a student. The daughter's life was threatened by a terrorist. Ramprasad Sharma's father was the influence for Sharma to become a strict soldier.
6. Sushmita Sen was the lead actress in the movie "Raaz".

The lead actress of the movie was Bipasha Basu. The movie was a horror movie which was released in 2002. Basu is a new generation actress who has done many movies with actor John Abraham. In the movie Raaz, Basu saw apparitions and spirits whereas no one else could. The spirits eventually led to the solution of a mystery.
7. What kind of movie was "Hungama"?

The main actors are Akshay Khanna, Aaftab Shivdasani, Rimi Sen, Paresh Rawal, Rajpal Yadav, and Shoma Anand. It was a movie of total confusion and misunderstanding. An example of one misunderstanding was a lie told by a girl in order to get a job. The girl, Anjali, happened to have the same name as her "father's" wife. This led to the misunderstanding of a man falling in love with Anjali who also happened to be a wedded lady.
8. The movie, "Bhagam Bhag", was mainly based in which of the following cities?

For the first time, Akshay Kumar and Govinda worked together in a movie.
The plot was similar to the movie, "Hera Pheri". Many sites, such as Buckingham Palace and Big Ben, were seen in the movie. Much of the British cultural atmosphere was shown with performances of a retro-band similar to the Beatles.
9. Who was the antagonist in the movie "Lagaan"?

The movie won 32 awards including Best Movie, Best Actor, and Best Director. The movie had been produced by the lead actor, Aamir Khan. Captain Russell, who was played by actor Paul Blackthorne, was an arrogant officer of the British rule in the province of Champaneer, India. Russell set a bet with a farmer that if beaten in a game of cricket, he would cancel the tax on the province. Captain Russell was shown throughout the film as being cruel and selfish towards the villagers.
10. "Rang de Basanti" was released in the year 2006.

The movie was written and directed by Rakeysh Omprakash Mehra. Made on a budget of Rs. 25 crores, the filming was completed in and around New Delhi. The basic plot of the movie was how revered freedom fighters, such as Bhagat Singh, influenced the patriotic actions of the youth of India today.
Source: Author hamaadpo 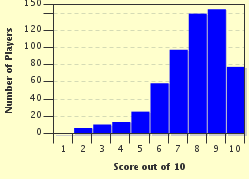 
Other Destinations
Explore Other Quizzes by hamaadpo