A quiz on the Indian movie industry - please give it a bad rating (preferably Poor please...)!

Quiz Answer Key and Fun Facts
1. The main centre of production of Hindi movies is Mumbai. How is it better known in India?

Yes - Western influence at its best - combining the words Bombay and Hollywood! Mollywood (or Kollywood)is the name given to the Tamil movie industry (based in Chennai).
2. Which actor is popularly known as 'the angry young man'?

Amitabh Bachanan is the most popular Hindi actor ever; now over 60 years old.
3. Which of these is NOT an Amitabh Bachchan movie?

Shah Rukh Khan starred in 'Baazigar'; 'Sholay' is the longest running Hindi movie ever - 5 continuous years at Minerva theatre in Bombay (now Mumbai).
4. The Indian film industry is notorious for its underworld connections - which of these people was killed by underworld thugs?

Gulshan Kumar was the owner of T-series - a music company. He was shot dead on August 12, 1997.
5. Which of these people (from the Tamil movie industry) did NOT join politics afterwards?

MGR was one of the greatest Tamil movie stars. Jayalalitha is the current chief minister of Tamil Nadu - she is called 'amma' (mother) by her followers. Karunanidhi is an ex-chief minister of Tamil Nadu. In fact all three were connected at one time - MGR's second wife (or mistress) was Jayalalitha and MGR and Karunanidhi were the best of pals at one time.
6. The Malyalam movie industry produces some of the most critically acclaimed movies. Which of these ideologies is a prominent feature in Malayali movies?

Kerala elected the communists to power in 1952 - the first time in the world a communist party was elected to power (and Kerala has the highest literacy (%) in India).
7. 'Pather Panchali' is one of this director's classic movies - he even won an Oscar for Lifetime Achievement. Who is this?

The movie told the story of a bunch of villagers who had to win a cricket match against the evil colonial Britishers (how Indians love making the Britishers villians in their movies) to avoid paying exorbitant taxes. The only problem - they never played cricket before!
9. The Indian movie industry is always short of ideas - it is not our fault if the people at Hollywood think of that idea first, is it? Which of these is an ORIGINAL story (not even 'inspired' from any foreign movie)?

'Darr'was based on 'Cape Fear', 'Awara Pagal Deewana' is a mix of 'Matrix', 'The Whole Nine Yards' and 'Mission Impossible' (now can even Hollywood manage that?), 'Baazigar' is based on 'A Kiss Before Dying'.
10. Which of the following was the costliest movie?

'Devdas' starred Shah Rukh Khan, Aiswariya Rai (former Miss World) and Madhuri Dixit; it was directed by Sanjay Leela Bhansali. The movie's total cost was around Rupees 50 crore (that's around 11 million dollars). (It was the costliest movie made through 2002).
Source: Author ace_sodium 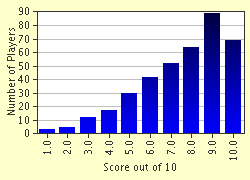