Bollywood Through the Decades: Actors Quiz

A quiz about actors of Indian Cinema spanning 70 years.

Quiz Answer Key and Fun Facts
1. 1930s: This actor started his acting career during the silent eras and proceeded to woo his audience for the next few decades. He was a pioneer of both Indian Cinema and Indian Theatre. He appeared in movies such as 'Alam Ara' (1931), 'Vidyapati' (1937) and 'Mughal-e-Azam' (1960). Who was he?

Prithviraj Kapoor was one of the first leading men in the industry. He started his career with a small role in India's first talkie, 'Alam Ara'. He continued in his cinematic journey giving hits like 'Manzil' and 'Milap'. His most memorable role was in K. Asif's 'Mughal-e-Azam' in 1960 as Emperor Akbar.

He has been honoured with Padma Bhusan and Dadasahed Phalke awards.
2. 1940s: This actor started his acting career unexpectedly with the 1936 movie 'Jeevan Naiyya' opposite Devika Rani. He went on to become one of the most celebrated actors of Indian Cinema giving hits like 'Kismet', 'Achhyut Kanya' and 'Mahal'. He is also fondly called "Dada Moni." Who is he?

Ashok Kumar was born as Kumudlal Ganguly in 1911. Through his acting, he attained an iconic stature in Indian Cinema. He was fondly called "Dada Moni" (literally meaning "brother jewel") and was the elder brother of Anoop Kumar, Kishore Kumar and Sita Devi.

His movie 'Kismet' opposite Mumtaz Shanti created history and he gave many hits. His pairing with Devika Rani, Leela Chintis, Madhubala and Meena Kumari was especially popular. He continued acting until the '80s and moved on to character roles.

He died aged 90 in 2001.
3. 1950s: This actor/producer/director started his career in 1946 with 'Hum Ek Hain' but it was 'Ziddi' in 1948 that made him a superstar. His dialogue delivery and enigma made him extremely popular and he gave hits like 'Guide', 'Paying Guest' and 'CID'. He was one of the trinity of actors that ruled the industry through the '50s and '60s. Who is he?

Dev Anand became a huge celebrity after 'Ziddi' and ruled the industry along with Raj Kapoor and Dilip Kumar for the next two decades. His biggest hits include 'Guide', 'CID', 'Tere Ghar Ke Samne' and 'Jewel Thief'. He was extremely handsome and was called the Gregory Peck of India.

His pairing with Nutan, Madhubala, Sadhana and Asha Parekh was hugely popular. He continued to act in movies through the '70s and into the 2000s. He holds a record for being the second actor with 104 solo lead films to his credit (first being Rajesh Khanna with 106 films).

He has won many awards for his acting including four Filmfare awards. He died in 2011 aged 88.
4. 1960s: This actor started his career in 'Jogan' (1950) but got his big break in 'Vachhan' in 1955, which was his first silver jubilee. He later gave many silver and golden jubilee hits and was titled "Jubilee Kumar." His other movies include 'Sangam,' 'Mother India' and 'Mere Mehboob'. Who is he?

Rajendra Kumar started with a role in Jogan opposite Dilip Kumar and Nargis. His second role was of Kishore opposite Geeta Bali in 1955 which made him a star. His performance in 'Mother India' as the son of Nargis got him critical acclaim and he gave other hits in movies such as 'Dil Ek Mandir', 'Ayee Milan Ki Bela' and 'Arzoo'. Most of his movies were silver and golden jubilee hits and his presence in a movie usually confirmed its success.

His pairings with Sadhana, Saira Banu and Vyjantimala were popular.

His films began to flop around 1972 with the arrival of Rajesh Khanna and he switched to character roles. He also launched his son Kumar Gaurav in his producing debut. He died in 1999 succumbing to cancer.
5. 1970s: This actor is one of the most celebrated actors of Bollywood is called "The Superstar of the Millennium," "The Angry Young Man" and "The Shahenshah of Bollywood." He has given many hits including 'Sholay', 'Silsila', 'Coolie', 'Zanjeer' and 'Abhiman'. Who is he?

Amitabh Bachhan started his career with 'Saat Hindustani' in 1969 and acted in few other movies but he became a superstar overnight with 'Zanjeer'. After the success of 'Zanjeer', there was no looking back for Bachhan and he gave smashing performances (usually as an angry young man) in 'Sholay', 'Deewar', 'Agneepath', 'Namak Haram' and 'Muqaddar Ka Sikandar'.

His dialogue delivery style is also immensely popular. He formed an extremely popular with Rekha, Jaya Badhuri (whom he later married), Zeenat Aman and Praveen Babi.

He also gave many hits with other actors such as Shashi Kapoor, Rishi Kapoor and Vinod Khanna. Bachhan has won many awards including three National Film Awards and five Filmfare Awards.
6. 1980s: This actor started his career as a child artist in 'Mera Naam Joker' in 1970 and did his first mature role in 1973 in the movie 'Bobby' for which he won several awards. His hits were 'Amar Akbar Anthony', 'Coolie' and 'Prem Rog'. He is also known as the chocolate hero. Who is he?

Rishi Kapoor was born to Raj Kapoor and Krishna Raj. He was launched by his father in his debut film as an adult, 'Bobby', opposite newcomer Dimple Kapadia. 'Bobby' was a big hit and he became a star. He went on to star in the biggest hits of the year such as 'Kabhie Kabhie', 'Amar Akbar Anthony' and 'Chandani'.

He was one of the romantic heroes in a time dominated by action heroes such as Amitabh Bachhan, Vinod Khanna and Jeetendra. His pairing with Neetu Singh (his future wife) was very popular. Rishi has two children: a son, Ranbir (who is a superstar in his own right), and daughter Riddhima. During the 2000s he switched to character roles in films such as 'Hum Tum' and 'Agneepath'.
7. 1990s: This actor was immensely popular in the '90s with his 'No 1' series such as 'Coolie No 1', 'Hero No 1' and 'Anari No 1'. He is known widely for his comic roles and dance moves. Who is he?

Govinda debuted with the movie 'Tan-Badan' in 1986 but his breakthrough came from the movie 'Ilzaam' from the same year. Govinda's dance in the movie was widely appreciated. At the start of his career he was often paired with Neelam in family dramas but later he had a famous pairing with Karishma Kapoor.

He often appeared in comedy, action or romantic movies. His hits include 'Partner', 'Raja Babu' and 'Chote Miyan Bade Miyan'. Govinda also hosts TV shows and has now switched to character roles in movies such as 'Kil Dil' and 'Happy Ending'.
8. 2000s: This actor became a superstar with his first movie released in 2000. Since then he has acted in many hit films such as 'Koi Mil Gaya', 'Bang Bang' and 'Jodha Akbar'. He is immensely popular for his "Greek God looks" and amazing dancing capacity. Who is he?

Hrithik Roshan is the son of Rakesh Roshan who is an actor/director himself. Hrithik became a superstar with his debut film which was the highest grossing film of the year. After a few flops, he gave huge hits such as 'Krishh', 'Dhoom 2' and 'Mission Kashmir'. Hrithik's pairing with Aishwaryia Rai and Kareena Kapoor is famous.

He also has a wax statue of himself in Madame Tussauds. He is considered to be one of the best dancers in the industry.
9. 2010s: This actor's debut film was 'Sawaryia' in 2007 that wasn't a huge blockbuster. However, he proved his acting in his other movies such as 'Bachna Ae Haseeno', 'Ajab Prem Ki Ghazab Kahani' and 'Barfi'. Who is he?

Ranbir Kapoor is the son of Rishi Kapoor and Neetu Singh and the grandson of Raj Kapoor. He entered the industry with 'Sawariya' and went on to give smashing hits such as 'Barfi', 'Wake Up Sid', 'Rockstar' and 'Yeh Jawani Hai Deewani'. He is one of the highest paid actors and most famous celebrity in the country.

His pairing is very popular with Deepika Padukone and Katrina Kaif. He has also won five Filmfare awards within the first decade of his career.
10. This actor is known as one of the most versatile actors of Bollywood that works in both commercial and parallel cinema. He won multiple National and Filmfare Awards for movies such as 'Sparsh', 'Paar' and 'Iqbal'. Who is he?

Naseeruddin Shah is known as one of the best actors in the industry purely by acting. He has won several National Film Awards. He is a prominent figure in parallel cinema with films like 'Sparsh' and 'Iqbal'. He has also acted in commercial cinema with movies such as 'Dedh Ishqia' and 'Hum Paanch.'
Source: Author girlzz 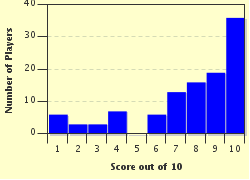 
Other Destinations
Explore Other Quizzes by girlzz