This is a 10 question quiz on the movie 'Rocky IV'.

Quiz Answer Key and Fun Facts
1. How many MAJOR fights was the Russian, Ivan Drago, involved in during the movie?

His first fight was against Apollo Creed. His second was against Rocky Balboa.
2. When they first arrived at their isolated training house in Russia, what did Paulie think Rocky was going to grow?

He made this comment after looking around and realizing how far away from civilization they were.
3. Did they give Ivan Drago a shot?

At a press conference, the Russians said Drago was natural. (Or something along those lines.)
4. Near the beginning of the movie, Rocky gave Adrian a gift which he repeatedly told her to "Open your _____."

Obviously his grammar is terrible. He should have called it a gift or a present. He probably said it about three times.
5. Where did the 'Creed vs. Drago' fight take place?

They show a picture of the marquee before the fight.
6. What was printed on Rocky's sweatshirt at the 'Creed vs. Drago' fight?

Paulie and Apollo's trainer were also wearing them. However they were different colors.
7. Moments before the 'Balboa vs. Drago' fight, Paulie told Rocky if he could be anyone else he'd want to be who?

He changed his mind shortly after.
8. Who said "I must break you!"

Drago said this right before he fought Rocky.
9. During the fight, Drago compared Rocky to what kind of metal?

He said this in Russian to his trainers between rounds.
10. Who said "I fight for me!"

Drago said this at the end after hearing the crowd cheering for Rocky.
Source: Author alienspacerock 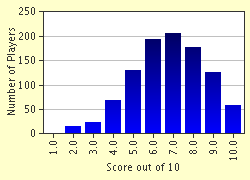 
Other Destinations
Explore Other Quizzes by alienspacerock