Sylvestor Stallone's greatest movie achievement. If you love this 1976 classic like I do, give this quiz a shot. Fair warning: you'd better know your stuff!

Quiz Answer Key and Fun Facts
1. In the opening sequence of "Rocky", our hero is fighting a bout in a club against one Spider Rico. Rocky is getting pretty thoroughly whipped until Rico fouls him, which makes Rocky angry enough to turn the tables and knock him out. What foul did Rico commit?

Rico has the fight almost won when he flagrantly head-butts Rocky. As soon as he sees that the butt cut his eyebrow, Rocky goes wild and beats Spider to the mat.
2. Rocky is constantly trying to flirt with Adrian, who works at the pet shop. After Rocky tries one of his terrible jokes on her, Adrian's boss sends her to clean out some cages. What was Adrian's boss' name?

As Rocky is leaving the shop with his turtle food, she asks him if he plans to pay for it. Rocky replies, "Crime don't pay, Gloria."
3. Apollo Creed, heavyweight champion, suddenly needs a new opponent when his scheduled opponent is injured during training. What was the scheduled opponent's name?

Prior to the bout being called off, we see Apollo on TV promising that, "Apollo Creed will duplicate the cracking of the Liberty Bell by cracking Mac Lee Green."
4. Rocky goes to Goldmill's Gym and finds out that his locker had been given to another fighter, Dipper. When asked why he gave away the locker, Mickey tells Rocky that Dipper needed it because Dipper is a contender, a climber. Mickey then informs Rocky, "You know what you are?" When Rocky asks "What?", what does Mickey tell him that he is?

"Let's face it," Mickey tells him, "I run a business here, not a soup-kitchen."
5. Paulie invites Rocky over for Thanksgiving dinner, and Rocky convinces Adrian to come out on a date with him. This isn't easy, as Adrian has locked herself in the bedroom. Finish the line Rocky says as he is trying to coax her out: "I don't know what to say, because I ain't never talked to no door before..."

Rocky finally sweet-talks her out, and they go ice-skating.
6. While they are ice-skating, Rocky decides to explain the origination of the term 'Southpaw'. In his description, it was because there was a left-handed fighter whose arm was facing toward... where?

An interesting explanation, to say the least...
7. Apollo's promoter, Miles Jergens, invites Rocky to come to his office to offer him a fight with Apollo Creed for the Heavyweight Championship of the World. When he asks Rocky if he wants to take the fight, Rocky initially says, "No." What WASN'T one of the reasons he gave in his refusal?

Rocky's words were along the lines of: "You see, I fight in clubs. I'm kind of a ham-and-egger. This guy, he's the best, and it wouldn't be much of a fight. Thank you very much, and everything. I appreciate it, and all that..." All mumbled. He obviously wasn't expecting the offer.
8. Rocky finally accepts the fight, and he, Adrian and Paulie watch the press conference on TV. It's mentioned during this press conference how much money Rocky would be paid for the fight. How much was it?

When asked what he would do with the money, Rocky simply stood in stunned silence.
9. When Rocky begins training, we see him wake up in the morning and drink raw eggs from a glass. In the background the radio is playing, where the DJ calls a listener to award a prize. The woman he calls says which of the following sentences?


Answer: "You've got some nerve calling me this time of the morning."

A funny little moment as she bawls out the DJ for calling so early and hangs up on him.
10. The owner of the gym Rocky works out in is Mickey Goldmill. Mickey shows up at Rocky's apartment because he wants to be Rocky's manager. When Rocky realizes that Mickey is looking for a free ride, what does he do while Mickey tries to convince him to hire him?


Answer: Throws darts at the door

Rocky throws darts at the bathroom door, despite the absense of a dartboard. He then locks himself in the bathroom until Mickey leaves.
11. Rocky decides to hire Mickey anyway, and soon we see Rocky training for the fight. What does Mickey do to improve Rocky's footwork?


Answer: He ties his feet together

Mickey has Rocky's feet tied together with a piece of string. If he can hit without breaking it, it means his feet are positioned properly. In "Rocky II", he makes him chase a chicken and spar with a lightweight. In "Rocky III", Apollo makes him bounce a ball in time to music.
12. Rocky's friend Paulie gets Rocky free meat every morning from the meat packing plant where he works. One morning he upsets Rocky so badly that Rocky repeatedly punches a side of beef to release his frustration. When he's done, Paulie makes a statement about the upcoming fight. What was this statement?


Answer: "If you do that to Apollo Creed, they'll put us in jail for murder."

Unfortunately for Rocky, it's little easier to beat a side of beef than somebody that hits back.
13. While Rocky is training like mad for the fight, champion Apollo Creed is barely training, figuring he'll make short work of this "nobody". His trainer sees Rocky hitting the sides of beef on a TV news report, and immediately sees that Rocky might be tougher to beat than they had thought. He decides to point this out to Apollo. Complete the sentence he says for this purpose: "Apollo, you better come look at your boy on TV - I think __ _____ ________."

Apollo, who is keeping busy with a meeting in the background, never looks up but mutters, "Yeah, yeah, I mean business too..."
14. Rocky hadn't wanted his training to be on the news report, but Paulie had called the reporters and he allowed it. Later that night, he and Adrian are watching TV when he complains about Paulie calling the news people. Paulie comes home drunk and hears Rocky say, "I just don't know what he wants from me." Paulie goes into a rage, and begins bashing the furniture with a baseball bat. Rocky makes a move to stop him, and Paulie threatens him with the bat. What does Paulie say to Rocky?

Adrian stops Paulie from attacking anything else, and while he's distracted, Rocky gets the bat away from him.
15. Rocky starts the final leg of his training, and it's all coming together. He's in the very best shape of his life. Mike, Mickey's little helper, watches Rocky do 50 one-armed pushups, and then tells Rocky this:


Answer: "You're gonna kill him"

We don't see much of Mike in the movie, but he's always entertaining when we do see him.
16. The night before the fight, Rocky can't sleep and goes for a walk. He ends up at the Philadelphia Spectrum, where the fight is going to take place. There are enormous posters hanging at either end of the arena, one of him and one of Apollo. When Miles Jergens (the promoter) walks in and sees him, Rocky tells him that the poster of him is wrong. What was wrong with it?


Answer: The color of his trunks

The poster showed him in red pants with a white stripe, while Rocky's actual trunks would be white with a red stripe. Jergens told him it didn't matter. "I'm sure you're going to give us a great show. Get some sleep, kid."
17. Rocky gets home, and wakes up Adrian. He tells her he's been kidding himself, and that he can't possibly win the fight. Instead, what does he say he wants to do?

Rocky - "I was thinkin' - it don't matter if I lose this fight. And it don't matter if this guy opens my head. 'Cause all I want to do is go the distance. Nobody's ever gone the distance with Creed, and if I can go that distance I'm gonna know for the first time in my life, see... that I weren't just another bum from the neighborhood."
18. The night of the fight arrives, and Rocky and his team are in the dressing room. Rocky looks hard at himself in the bathroom mirror, then does what?

Rocky prays at the sink. He would also kneel and pray in the ring in his corner before the first bell.
19. Rocky and his entourage then follow the hallway to enter the arena and get into the ring. Mickey notices that Rocky has an advertisement for Paulie's meat packing plant on his robe. How much did Rocky say he was getting paid to have the advertisement on the robe?

Rocky tells Mickey that for having the ad on the robe, Paulie would make three grand, and Rocky got the robe for free. "Shrewd..." Mickey tells him.
20. As Rocky walks to the ring, he runs into Paulie, who introduces Rocky to his date for the night. How much did his date cost him?

Paulie says, "How do you like my date? Cost me two hundred dollars!" The date pipes up with, "Two-fifty."
21. Apollo enters the ring dressed as what character?

He rides in as Washington, throwing silver dollars to the crowd. Once he gets into the ring, he changes into the Uncle Sam costume.
22. Smokin' Joe Frazier is introduced and enters the ring to wish the two boxers good luck. He tells Rocky not to hurt Apollo. What does Rocky reply?

Frazier then walks over to Apollo and tells him, "You been duckin' me a long time." Apollo tells Joe he's next.
23. Shockingly, Rocky knocks Apollo down in the first round. Apollo gets up and fights back with a vengeance, breaking Rocky's nose. In his corner after the round, Rocky asks Mickey how it looks. Complete Mickey's response: "Ahhh, it's an ___________."

Rocky's claim to fame before the fight had been that he'd never had his nose broken.
24. Rocky goes the distance, and the fight is very close. Apollo ends up winning a split decision victory. In his corner, reporters are trying to interview Rocky, and Rocky tries to get them to leave him alone so he can find Adrian. Which of the following does Rocky not yell during this time?

Rocky yells at the reporters to come on, get the microphones out of his face - he's had enough things in his face tonight. And, of course, he yells, "ADRIAN!" over and over.
25. What is the last line of dialogue of the movie, spoken by Rocky to Adrian?


Answer: I love you

As they embrace, you can hear in the background the words, "Winner and still Champion of the World, Apollo Creed!" That is the only indication of the final decision. A great movie.
Source: Author Misregistered 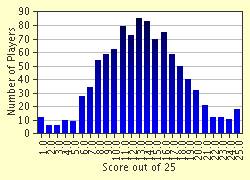 
Other Destinations
Explore Other Quizzes by Misregistered