The movie 'Rocky' (1976) has been around for years, here are some obscure facts about this great film that you may not know. This quiz deals with behind the scenes information, not the movie directly.

Wepner, 'The Bayonne Bleeder' was Ali's opponent in the 1975 bout that inspired the movie. Stallone wrote the screenplay in three days. Wepner sued Stallone three times over a share of the profits, settling for an undisclosed amount after the third suit.
Wepner was bloodied above both eyes and had his nose broken by Ali. During the fight Wepner knocked Ali to the mat, becoming one of the few men to knock Ali down. The fight entered the fifteenth round but Ali won on a Technical Knock Out (TKO). Wepner later went on to fight professional wrestler Andre the Giant.
2. Was the movie 'Rocky' completed at or under it's budget?

The film was originally budgeted for one million dollars, The producers almost made it, bringing it in at $1,100,000.00. To date (August, 2008) the movie has grossed more than $400 million.
3. What revolutionary piece of cinematic equipment was invented in Philadelphia and used extensively in 'Rocky'?

Philadelphia's Garrett Brown invented the Oscar winning Steadicam. It gives the cameraman the ability to move around the action without the picture becoming jumpy. It was used in many scenes in 'Rocky'. The scene where Rocky runs up the steps of the Philadelphia Art Museum for the triumphant moment at the top was filmed during tests for the original Steadicam system. The tests inspired the Art Museum scenes.

Steadicam technology is used in many of today's digital cameras.
4. What part of Sylvester Stallone's anatomy was permanently disfigured during the filming of 'Rocky'?

Stallone spent so much time punching the frozen beef that his knuckles were permanently disfigured. He did it so many times in different takes and rehearsals that after the filming was done, he noticed the shape of his hands had changed. His knuckles were flattened and still are to this day.
5. What was the name of the boxing gloves used in the Championship Fight scene?

They were called Casanovas. Casanovas were illegal in the United States. Stallone in an interview said that the producers wanted to use them, because they were sleeker in appearance.
6. The two separate 'Art Museum Steps' scenes were filmed the same day.

They were filmed two hours apart, just before and just after sunrise. In the first attempt, he failed to make it to the top...he succeeded on try number two.

The Philadelphia Museum of art steps were also seen in all of the sequels but 'Rocky IV' (1985).

Visitors to the museum can often be seen recreating Rocky's famous run up the front steps, known locally as the Rocky Steps.

A bronze statue of Rocky was placed at the top of the steps for the filming of 'Rocky III' (1982). The statue was later moved to the Wachovia Spectrum due to a debate over the meaning of "art". The statue was on the steps again for 'Rocky V' (1990), and also appears in the movies 'Philadelphia' (1993), and 'Mannequin' (1987). It currently stands at the bottom of the steps.
7. In the 'night before the fight scene', what condition was Stallone suffering from?


Answer: He was drunk.

Director John Avildsen threatened to cut the scene where Stallone confessed his fears to Adrian. The film was running long and he gave Stallone one take. Worried about it, Stallone got drunk and nailed the scene in one take.

The scene was filmed in REVERSE order.
Beginning in the heaviest make-up at round fifteen, the actor's make-up was slowly removed until they were at round one.
Because of this technique, the movie won an Oscar for Best Film Editing.
9. What female singer turned down the role of Adrian?

Midler was approached but wasn't interested. Susan Sarandon also read for the part. Producer Irwin Winkler was not interested in having the unknown Stallone star in the film. He wanted James Caan or Ryan O'Neal in the role of Rocky. Can you imagine James Caan and Bette Midler?

Midler hadn't done much movie work prior to her Oscar-nominated performance in 'The Rose'(1979). She has also been in, 'Ruthless People'(1986) and 'Beaches' (1988).
10. Producer Irwin Winkler offered Sylvester Stallone a large sum of cash NOT to play Rocky Balboa. 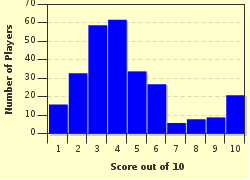 
Other Destinations
Explore Other Quizzes by maskman22