How Well Do You Know 'Rocky'? Trivia Quiz

The questions in this quiz deal with minor details from 'Rocky,' the cinematic classic from 1976. Let's see if you were paying attention...


Answer: On a slip of paper in his hat

When Rocky cannot open his lock, he checks with the paper to see if he's made a mistake. What he doesn't know is that his locker has been given to another boxer.
2. What are Rocky's pet turtles named?

Rocky talks about his "exotic" turtles often.
3. By what insulting name is Rocky not referred to at any point in the movie?

Mick, Marie, and Gazzo's driver call Rocky the other names.
4. At the time of the big fight between Rocky and Apollo Creed, how much does Rocky weigh?

It is announced before the fight that Rocky weighs in at 190, and Apollo at 210.
5. When Adrian goes to Rocky apartment after their first date, what foods do Rocky offer to her?

Rocky offers her the few items he has in his kitchen, it's Thanksgiving after all.
6. What does Rocky say the birds in the pet store remind him of?

Rocky tells Adrian they remind him of "flying candy."
7. What color are the ropes surrounding the ring where Rocky and Apollo fight?

The ropes are red and the mat is blue with a circle of stars, a patriotic theme echoed by Apollo's costumes and trunks.
8. According to Rocky, what did he and his turtles eat for Thanksgiving last year?

Rocky briefly tells Paulie that last Thanksgiving he ate Spam with his turtles, and he is grateful to be invited to Paulie and Adrian's for turkey this year.
9. According to Paulie, what does Adrian do if he's ten minutes late coming home?

When Rocky expresses interest in her, Paulie insults his sister by describing her as weak and constantly nervous.
10. What object does Rocky carry in his hand as he walks around the neighborhood?

Rocky is often seen bouncing the ball as he casually goes about his business.
Source: Author vinout 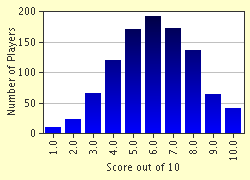 
Other Destinations
Explore Other Quizzes by vinout