All questions about the original "Rocky" movie.

Quiz Answer Key and Fun Facts
1. Who is the number one contender that Apollo Creed is supposed to fight for the Heavyweight title at the beginning of the movie?

Apollo says right at the start of the movie that he will celebrate the cracking of the Liberty Bell with the cracking of Mac Lee Green's skull.
2. Who was the real heavyweight that came from nowhere to go the distance with the champ, the man that Rocky was based on?

Chuck Wepner was a nobody who went the distance with arguably the greatest boxer of all time, Muhammad Ali.
3. What country does Mac Lee Green hail from?

We learn this when Apollo's promoter says that he could use some more publicity in Canada.
4. Mick tells Rocky a story about when he was in his prime. What does the man that Mick fought do in the fight?


Answer: Puts a nail in the thumb of his glove

Mick had "spit comin' out of (his) cheeks!"
5. According to Apollo Creed, which fighter is next?

Before the start of the Apollo/Rocky fight, Joe Frazier enters the ring and Apollo starts teasing him, saying "You're next Joe! You're next Joe!"
6. What does Paulie say when Rocky begins to punch the meat in the refrigerated box?


Answer: "You're breaking the ribs."

You can hear the ribs cracking from Rocky's punches.
7. Where does Rocky's gear get moved to?

Mick moves Rocky's stuff to Skid Row to make room for Dipper Brown's gear in a locker.
8. What color are Rocky's trunks in the giant poster of him?


Answer: Red with a white stripe

Rocky's trunks, in actuality, are white with a red stripe. The poster was wrong.
9. When Rocky wears his robe with the meat locker's logo on it, he gets to keep the robe. What does Paulie get?

Mick defines this deal as shrewd.
10. According to the loan shark's driver, where should Rocky take Adrian for their first date and why?

The driver peels out after telling Rocky to do this.
Source: Author hardcorehogle 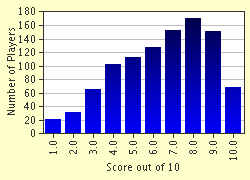 
Other Destinations
Explore Other Quizzes by hardcorehogle