This quiz is based on the very first 'Rocky' movie. It features some pretty important stuff from the movie. Enjoy!

Quiz Answer Key and Fun Facts
1. The very first scene in the movie took place on November 25, 1975 and featured a fight between Spider Rico and Rocky Balboa. Where did the fight take place?

The fight was Rocky's very first, that was shown in the series. After Spider Rico head-butted him, in the second round, Rocky got angry and pummeled Rico into the canvas. Less than 48 hours later, he went to Mick's gym and Mick was obviously unimpressed by Rocky's victory.
2. After getting through another rough day, Rocky decided to make a stop in the pet shop where Adrian worked. Apart from entertaining Adrian, Rocky wanted to say hello to a dog in the shop he really liked. What was the dog's name?

The dog that played 'Butkus' was Sylvester Stallone's very own dog and, interestingly enough, the dog's real name was also Butkus. He appeared in the sequel, as well, but died before the third could be made.
3. After the visit to the pet-shop, Rocky was forced to undertake a task which his employer, Mr. Gazzo, thrust upon him. Apparently a man, named Bob, borrowed two-hundred dollars from Mr. Gazzo, and failed to repay it. Gazzo wanted Rocky to get the two-hundred back from Bob, and also do what?

Rocky tracked Bob to the harbor and caught him. The man could only pay one-hundred thirty dollars, but he offered his coat, claiming it had a value of at least fifty to sixty dollars. Rocky allowed Bob to keep his coat and he didn't break the man's thumbs like Gazzo had asked.
4. After a stern lecture from Gazzo, Rocky decided to head to Mick's Gym. Rocky could not understand why his locker could not be opened but he was soon informed that it had been given to another fighter, a real champion from Mickey's point of view. What was this other fighter's name?

In an originally scripted, but un-filmed, portion of the film, Rocky was supposed to fight Dipper Brown and prove to Mick that he was the top prospect, not Dipper. Rocky was scripted to win that fight and reclaim his locker, hence, proving his value to Mick.
5. Mac Lee Green, the fighter who Apollo Creed was originally supposed to fight, declined the fight because of a broken wrist. Apollo decided that he still wanted to have the fight, but he wanted to fight a novelty, and give a local underdog fighter an opportunity at the title. Of all fighters, why did Apollo choose Rocky?


Answer: Because Rocky was an Italian.

Apollo Creed said that the media would go all over the idea of an American fighting a descendant of one of the founders of America. Apollo and the fight promoter liked the idea, but Duke, his trainer, warned Apollo not to fight Rocky, because Rocky was a southpaw. Creed also like the sound of his name.
6. After dealing with some neighborhood kids, Rocky was on his way to meet Adrian, with her brother, Paulie. She wasn't informed that he'd be joining. After Adrian refused to leave with Rocky, Paulie became angry and threw the Thanksgiving turkey out the door into the alley. After that incident, Rocky managed to talk Adrian into going out with him. Where did Rocky take Adrian for their date?


Answer: To an ice skating rink

Although the skating rink was closed, Rocky managed to get the ice to himself and Adrian, by paying the custodian ten dollars for ten minutes on the ice. While they skated, Rocky explained the origin of the term southpaw, and Adrian asked Rocky why he wanted to fight. Rocky said that he fought because his parents told him that he wasn't born with much of a brain and that he should use his body.
7. After Rocky was publicly mocked on television, by Apollo Creed, Mick showed up at Rocky's apartment with an offer. The offer was that he'd train Rocky so that he could defeat Apollo. Rocky accepted the offer immediately.

Actually, Rocky was quite reluctant to get help from Mick, because Mick was never there for him before. Rocky ended up forcing Mick to leave, due to his sheer ignorance. After Mick was halfway down the street, Rocky realized the advantage of having a manager and a trainer. Rocky found Mick and told him that he wanted Mick's help.
8. After Rocky's final training session, he could not sleep, so he ended up going to The Spectrum. He noticed that the picture of him was wrong, as it featured red trunks with a white stripe as opposed to white trunks with a red stripe. The fight promoter, Jergens, said that it didn't matter because ______________. Why did Jergens say, that the picture didn't matter?


Answer: Rocky was going to put on a great show anyway.

Jergens told Rocky that he'd put on a great show simply to raise Rocky's morale. After talking to Jergens, Rocky headed home to Adrian, and told her that he couldn't win. He said that all he wanted to do, was go the distance with Apollo Creed, because no-one had ever done that before.
9. Although, Rocky was an underdog in the fight with Apollo, he somehow managed to knock Apollo down. Apollo Creed paid back the favor later on in the fight. In what round did Rocky knock down Apollo?

After Rocky took a few strong hits in the first round, Rocky unleashed a powerful uppercut which instantly knocked Apollo Creed to the canvas. Apollo got up at the count of eight, and continued to attack Rocky. Both he and Rocky, were very battered by the end of the fight, however, Apollo prevailed, by a points decision.
10. How many stars were there in the ring where Apollo Creed and Rocky Balboa clashed for the fight, aptly named the 'Superfight'?

The ring had thirteen stars in it to represent each of the thirteen original colonies of America. The thirteen colonies of North America were British settlements along the east coast. They joined together to form the original states of the United States. They included New Hampshire, Massachusetts, Rhode Island, Connecticut, New York, New Jersey, Pennsylvania, Delaware, Maryland, Virginia, North Carolina, South Carolina, and Georgia.

The final fight, between Creed and Balboa, was filmed in reverse order. It started in the fifteenth round, with both Sylvester Stallone and Carl Weathers in heavy make-up. Gradually the make-up was slowly removed until the first round was reached. As a result of this innovative approach to filming, 'Rocky' won an Oscar for Best Film Editing.
Source: Author Bruce007 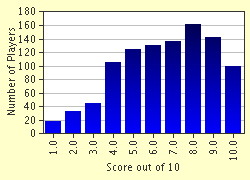