Welcome to the lyric quiz where there will be questions about songs from both "The Lion King" and "The Lion King 2: Simba's Pride".

Quiz Answer Key and Fun Facts
1. What is the next line? "I'm gonna be a mighty king, like no king was before..."


Answer: "I'm brushing up on looking down, I'm working on my roar!"

"I Just Can't Wait to be King" is sung by Simba near the beginning of "The Lion King" when Simba and Nala are off to the elephant graveyard. Simba is very excited to take on his role as king.


"I Just Can't Wait to be King" runs for 2:50. The music is by Elton John, the lyrics are by Tim Rice, arrangement and production are by Mark Mancina. The lyrics are performed by Jason Weaver with Rowan Atkinson and Laura Williams.
2. "Hakuna Matata. What a wonderful phrase. Hakuna Matata! Ain't no passing craze!" What line came next in the song?


Answer: "It means no worries for the rest of your days! It's our problem free, philosophy!"

"Hakuna Matata" is a shared song between Timon and Pumbaa and eventually Simba joins in, in "The Lion King". Timon and Pumba begin to teach Simba their ways of having no worries, after he runs away after his father's death.

Hakuna Matata runs for 3:33. The music is by Elton John, the lyrics are by Tim Rice and are arranged and produced by Mark Mancina and Jay Rifkin. The lyrics are performed by Nathan Lane and Ernie Sabella with Jason Weaver and Joseph Williams.
3. What line was sung next? "Like dark turning into day. Somehow we'll come through..."


Answer: "Now that I've found you. Love will find a way."

"Love Will Find a Way" is sung by Kiara and Kovu in "The Lion King II: Simba's Pride" when Kiara and Kovu are finally reunited after Simba banishes Kovu.

"Love Will Find a Way" is Kiara and Kovu's first encounter following Kovu's banishment. They decide their love is too strong for their differences to keep them apart.

Liz Callaway and Gene Miller provide the singing voices for Kiara and Kovu in the film. The end title (the last few lines in the song before fading out) is performed by R&B artists Kenny Lattimore and Heather Headley.
4. What comes next in this song? "Can you feel the love tonight, you needn't look too far."


Answer: "Stealing through the night's uncertainties, love is where they are."

"Can You Feel The Love Tonight", from "The Lion King", is a reunited/love song shared between Simba and Nala, after she discovers him in the jungle on her search for help for the Pride Lands.

"Can You Feel the Love Tonight" runs for 2:57. The music is by Elton John the lyrics are by Tim Rice and are arranged and produced by Mark Mancina. The lyrics are performed by Joseph Williams and Sally Dworsky with Nathan Lane, Ernie Sabella and Kristle Edwards
5. "I know your powers of retention are as wet as a warthog's backside." What line does he sing next?


Answer: "But thick as you are pay attention."

"Be Prepared" is sung, by Scar in "The Lion King", to the hyenas as he explains his plot to take over the roll of king of the Pride Lands.

"Be Prepared" runs for 3:40. The music is by Elton John and the lyrics are by Tim Rice. The lyrics are arranged and produced by Hans Zimmer, and performed by Jeremy Irons with Whoopi Goldberg, Cheech Marin and Jim Cummings
6. "If there's so much I must be, can I still just be me? The way I am." What does Kiara sing next in this song?


Answer: "Can I trust in my own heart, or am I just one part, of some big plan?"

In "The Lion King II: Simba's Pride" the song "We Are One" is sung by Simba and, with this particular line, Kiara. Simba teaches Kiara that ever being there is a part of each other. Young Kiara just simply wants to be herself.

"We Are One" - is sung by Cam Clarke and Charity Sanoy.

Following Kiara's encounter with Kovu and Zira, Simba explains how important she is to the pride and that the pride is one.
7. "From the day we arrive on the planet, and blinking, step into the sun." What is the next line in the opening song?


Answer: "There's more to see than can ever be seen."

"The Circle of Life" is the opening song to "The Lion King", and shows how everything moves in one way, in a circle of life, and pretty much is the theme/lesson/plot of the whole movie.

"Circle of Life" runs for 4:00. The music is by Elton John and the lyrics are by Tim Rice and are arranged and produced by Hans Zimmer. The lyrics are performed by Carmen Twillie; African vocals are performed by Lebo M and South African chorus.
8. What do the animals sing after this? "Someone once lied to us. Now we're not so blind."


Answer: "For we knew he would do what he's done."

"Not One of Us" is sung by the animals of the Pride Lands in "The Lion King II: Simba's Pride", after Simba banishes Kovu, dubbing him not one of them and forever more and outlander.

"Not One of Us" - is sung after Kovu is exiled by Simba, after he wrongfully accuses Kovu of betraying him in an attempt by the Outlanders to assassinate him.

This was the first time the animals of the pride, other than the lions, have been shown talking.
9. "Scar is gone, but Zira's still around to love this little lad." What is the next line in Zira's diabolical song?


Answer: "Till he learns to be a killer, with a lust for being bad!"

Zira sings "My Lullaby" in "The Lion King II: Simba's Pride" after her plan is made to have Kovu trick Simba and destroy him so they can have back the lands that belong to Scar.

"My Lullaby" - is sung by Suzanne Pleshette, Andy Dick, and Crysta Macalush. This song is Zira's lullaby to Kovu, which outlines her plot for him to kill Simba and how proud it would make her.
10. What lyric comes next in Rafiki's song of love? "You better watch your step 'cause the path is steep, better hold your breath 'cause the water's deep.",


Answer: "It's a long way down over Lover's Leap but falling's half the fun!"

Rafiki shares, with Kiara and Kovu in "The Lion King II: Simba's Pride", a word called Updeni, which means love in Swahili. He teaches them that their love will be true no matter where they are and nothing can come in the way of it.

"Upendi" (Swahili for "love") is sung by Robert Guillaume, Liz Callaway, Gene Miller, and Ladysmith Black Mambazo. This is Rafiki's song to Kiara and Kovu about love and happiness. It is sung by Rafiki and his animal friends.
Source: Author MakiTokito 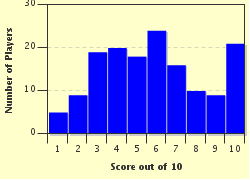 
Other Destinations
Explore Other Quizzes by MakiTokito