All About "Mrs. Robinson." Trivia Quiz

This a quiz on my favorite Simon and Garfunkel. The quiz will be over the lyrics and the history of this great song.

Share on Facebook
Share on Twitter
Share by E-Mail
Author
AlchemyGirl
Time
3 mins
Type
Multiple Choice
Quiz #
260,551
Updated
Dec 03 21
# Qns
10
Difficulty
Average
Avg Score
7 / 10
Plays
2992
This quiz has 2 formats: you can play it as a or as shown below.
Scroll down to the bottom for the answer key.

Quiz Answer Key and Fun Facts
1. Who is it that loves Mrs. Robinson more then she will ever know?

The opening lyrics to this song are " And here's to you Mrs. Robinson Jesus loves you more than you will know, wo wo wo God bless you please, Mrs. Robinson" This song was used in the 1967 movie, "The Graduate."
2. In the early stages of this song, it was not about a Mrs. Robinson. What was the name that Paul Simon first planned on using for the song?

This song was first written about presidential wife, Eleanor Roosevelt, but was changed when the song was needed for the movie that made it famous. Eleanor Roosevelt was a female rights and black rights activist and she helped everyone as much as she could during the Great Depression.
3. According to the song, who does Heaven hold a place for?


Answer: Those who pray

"God bless you please, Mrs. Robinson Heaven holds a place for those who pray, hey hey hey Hey hey hey" This song is about a college graduate who has an affair with an older woman named Mrs.Robinson.
4. Which singer covered this on his 1969 album?

Frank Sinatra covered this on his 1969 album "My Way." He changed some words and made a few references to the movie "The Graduate."
5. According to the song, when you look around, what type of eyes do you see?

"We'd like to know a little bit about you for our files We'd like to help you learn to help yourself Look around you, all you see are sympathetic eyes
Stroll around the grounds until you feel at home" This line may mean a number of things such as the grounds of a retirement home or of an asylum.
6. Which baseball player is featured in this song?

The song says "Where have you gone Joe DiMaggio." This caused confusion to the general public because Joe DiMaggio was very much alive at the time that the song was written and featured in "The Graduate." It turns out that Paul Simon is a much bigger fan of baseball player Mickey Mantle.

When asked why he was not featured in the song instead of DiMaggio, Simon replied that "It's about syllables!"
7. Beside which baked good is Mrs. Robinson told to put her secret next to?

"Hide it in a hiding place where no one ever goes Put it in your pantry with your cupcakes". This line of the song sometimes made people think that the Mrs. Robinson of the song had an alcohol or drug addiction. Many people thought that "Cupcakes" were a symbol of this addiction.
8. Who rerecorded "Mrs. Robinson" in 1992?

The Lemonheads recorded this and the single reached number eight on US charts. the band was briefly known as The Whelps, but the name was changed to reflect the popular candy which is sour on the outside and sweet on the inside.
9. Who, most of all does Mrs. Robinson have to hide her secret from?

"It's a little secret, just the Robinsons' affair Most of all you've got to hide it from the kids." This line shows that Mrs. Robinson not only has a husband, but children as well.
10. On the popular show "Family Guy," Peter spoofs the song's name. What does he call the song?

On the episode of "Family Guy" called "Mr. Saturday Knight," Peter mentions that his first job was with a folk band. It shows Peter sitting with two curly haired men. The two men are fighting with Peter about the song. Peter stands up and states "Fine. I'm leaving, and I'm taking my song, 'Mrs. Fleckenstein', with me".
Source: Author AlchemyGirl

This quiz was reviewed by FunTrivia editor ertrum before going online.
Any errors found in FunTrivia content are routinely corrected through our feedback system.
Most Recent Scores
Dec 23 2022 : Guest 109: 8/10
Dec 14 2022 : Guest 136: 8/10 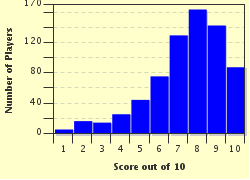 
Other Destinations
Explore Other Quizzes by AlchemyGirl