This quiz will test anyone's mettle on the Beach Boys. Most of it will focus on the individual members outside of the Beach Boys' work. So if you want to learn a thing or two then accept the challenge. This is what trivia is all about.

Quiz Answer Key and Fun Facts
1. What song did Brian Wilson first collaborate with Murry Wilson (aka Reggie Dunbar) on? Brian's first collaboration with Murry is under one of these names, just in case you weren't aware of Murry's pseudonym.

For those of you who picked "Break Away" that normally would have been correct. But sheet music is the one and only authority on crediting a writer, ask any publishing company. BMI is the main source of publishing for the Beach Boys. So not too many check ASCAP for any Beach Boy songs or any related to Brian Wilson. I found this piece of sheet music on a private auction titled "Heartbreak Lane" with Murry Wilson and Brian Wilson credited as the writers. At first I couldn't believe it, so I checked ASCAP publishing to be certain and sure enough it was there. I wanted to make sure that nobody manipulated the sheet music and digitally added Brian's name to it on the auction. I have the scan of the sheet music in case anyone doubts it.
I know Brian Wilson is not credited on Murry Wilson's album with "Heartbreak Lane" on it, but that's not the official source of a writer's publishing. Sheet music is always the official source. "Many Moods Of Murry Wilson" was released in Oct '67. "Break Away" was released in '69
Check the ASCAP website for verification.
2. What was Brian Wilson's highest charted song written in the 70s, on Billboard? Whether it was co-written or a solo written effort.

You'll note I never asked what Beach Boy song Brian had written that charted the highest. Just what song Brian had written in the 70s that charted the highest. "It's Ok" charted at number 29 on Billboard in '76, however Celebration's "Almost Summer" the group Mike Love fronted, charted at number 28 on Billboard in '78 with the writing assistance of Brian.
"Almost Summer" beat out "It's Ok" by that much. Would you believe by this much.
3. Which USA manufactured Beach Boy album was Bruce Johnston first pictured on?

Well you won't notice Bruce right away on the "Party" album but he's there in a dark sweater and blue shirt playing volleyball on the back cover. If you know the Beach Boys at all you'll recognise him easily. He was initially on the "Summer Days" cover when Al Jardine could not make the photo shoot that day.

But due to Bruce's contract with Columbia, he was not given permission to be on there. The same thing with "Pet Sounds", Bruce was on the back cover dressed in some Japanese costume while on tour there. Check it out.
4. Which one of these surfing bands was Bruce Johnston NOT involved with?

Phil Sloan and Steve Barri were involved with The Rincon Surfside Band on Dunhill in the USA. Phil Sloan and Steve Barri cover some Beach Boy and Jan and Dean songs.
Hot Doggers released an album in '63 on Epic in the USA. No singles were issued from this album.
The Sidewalk Surfers was a one-off single on Jubilee in the USA. Bruce Johnston wrote "Skateboard" for this single and sang on it.
Bob Sled and The Toboggans was another one-off single on Cameo titled "Here We Go(The Surfer Boys Are Going Skiing). Bruce wrote it and sang on it.
5. Dennis Wilson had an association with Charles Manson. Do you know the nickname Dennis gave Charles Manson?

Dennis said in an interview with "Rave" magazine, a UK publication, that "the Wizard scares me sometimes", referring to Charles Manson. That's all I am saying on this sensitive topic.
6. When the Beach Boys recorded their first single "Surfin'", what did Dennis Wilson do on the song?


Answer: Dennis was not on it

Dennis was told by Murry Wilson, the father, that he wasn't good enough to play drums yet. So Dennis took off without sticking around for the vocals. Brian played the makeshift drums as described instead.
7. When David Marks left The Beach Boys what was the name of his group initially, when he first formed it?


Answer: Dave and The Marksmen

Murry Wilson forced David to leave the group, so he decided to form his own group and was signed by A & M Records. Now the confusion comes with another group called the Marksmen on the Westco label. This is not the same group as Dave and The Marksmen which was David Marks' name for the group. I know Brad Elliot's "Surf's Up" book has it as Dave's group (The Marksmen), but it has since been proven wrong.
8. What was Al Jardine's first solo writing credit released on vinyl in the USA?

Al Jardine wrote "Italia", an instrumental, before the Beach Boys released any albums. He finally got it released on the Murry Wilson album "Many Moods Of Murry Wilson" in '67. According to the Wilson brothers he had many of them.
9. What was the first Beach Boys vocal song Carl Wilson co-wrote?

Again the sheet music has the final word. Carl's name is not on the "Dance, Dance, Dance" single released in the USA. But it is on the sheet music and the "Today" album as Brian Wilson and Carl Wilson. The single was released in '64 and it did chart on Billboard at number Eight.
"Long, Promised Road" made it to number 89 on Billboard in '71, and it's co-written with Jack Reilly.
Now that wasn't so hard, if you really know your Beach Boys.
10. Who was Carl Wilson's first backing vocal and playing an instrument on the same song with, outside of the Beach Boys, in the 70s?

Carl did produce The Flame in '70 but he did not do any backing vocals for them.
In early '72 he backed up Mama Cass on "Disney Girls". But it was in May of '71 that Carl recorded "All Life Is One" with Charles Lloyd making it his first backing vocal as well as playing the Moog.
11. Who was Mike Love's first writing credit with, outside of the Beach Boys in the 70s?

"How Sweet" was co-written with Charles Lloyd on his "Warm Waters" album in '71.
12. Who was Mike Love's first backing vocal with, outside of the Beach Boys group with Brian, Al and Carl participating, in the 70s?

Charles Lloyd wins again, that's three in a row for Charles Lloyd. It was also "All Life Is One" from the "Warm Waters" album, the same as Carl Wilson.
Mike also backed up King Harvest in '75.
By this time if you missed any of the Charles Lloyd answers, you'll either start hating him or find out what he's all about. It's up to you.
13. Who was Brian Wilson's first produced female sole lead vocalist? Please read carefully.

"Don't Worry Baby" by B.J. Thomas is the only one that Brian was not involved with. It was released on MCA in '77, charting at number 17 on Billboard.
Jackie DeShannon's "Boat To Sail" om Columbia in '75.
Tim Curry's "Just Fourteen" on Ode in '76.
Johnny Rivers "Help, Me Rhonda" in '75 on Epic.
15. Which group or artist did Carl Wilson NOT do backing vocals for?

California Music was a pet project for Bruce Johnston after leaving The Beach Boys. It got kick started in '74 with a reluctant Brian Wilson assisting Bruce.
Four singles were released on Bruce's Equinox label on RCA with Brian assisting on a couple of songs. Carl was never a part of it.
America "Hat Trick" in '73 on WB.
Mama Cass sang "Disney Girls" in '72 on RCA.
David Cassidy's "I Write The Songs" produced by Bruce Johnston on "The Higher They Climb, The Harder They Fall" album. Carl is doing backing vocals on the last three choices..
Source: Author TOKENHIPPIE

This quiz was reviewed by FunTrivia editor agony before going online.
Any errors found in FunTrivia content are routinely corrected through our feedback system.
Most Recent Scores
Jan 16 2023 : Guest 173: 0/15
Dec 17 2022 : Guest 94: 2/15 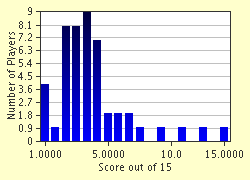