There are plenty of casual Chili Peppers fans out there, but very few who really know their stuff. Find out in which category you are by taking this quiz!

Despite producing their album 'Blood Sugar Sex Magik' in 1991, Rubin actually met the band for the first time in '87, during the recording of 'The Uplift Mofo Party Plan' when he brought The Beastie Boys to their recording studio.
2. On the cover of which single is Flea's daughter Clara prominently featured?

Clara appears on the cover of the 'Aeroplane' single dressed as a fairy/angel. She also appears in the video and contributes backing vocals to the song itself.
3. On which song on 'By The Way' does John Frusciante play bass for part of it?

While jamming out ideas during the recording of 'Don't Forget Me', Flea played a quick bass fill at the end of the solo that John especially loved, but when asked to play it again Flea couldn't remember what he did. So John picked up Flea's bass and played what he remembered from the fill, and that's what has ended up on the album.
4. What did the band originally want to call the song 'Battle Ship'?

Playing with Macy Gray is one of the only things Marshall has done since leaving the Peppers that keeps him in the public eye.
6. Which instrument is John Frusciante's father a classically-trained player of?

As well as being a classically-trained pianist, John Frusciante Sr. is a respected lawyer.
7. What is the full given name of Flea's character in the 'Back To The Future' movies?

Flea appears as Douglas J. Needles in 'Back To The Future 2' & 3 and plays a pivotal role in the eventual development of the character of Marty McFly, played by Michael J. Fox, although Flea only appears in two short scenes.
8. Which idol of his did Flea get to hug while a youngster?

A tearful Flea famously met Gillespie while backstage at one of his shows, and the jazz hero was so touched by the simple admiration Flea showed him that the two hugged.
9. What is the name of Hillel Slovak's brother?

James Slovak is the author of 'Behind The Sun: The Diary And Art Of Hillel Slovak', the only book so far to be written about the late guitar hero.
10. Which of these actors has Flea appeared in a film with, although not in the same scene?

Flea and Viggo Mortensen both appear in Gus Van Sant's remake of Alfred Hitchcock's 'Psycho'. As of yet, Flea has not appeared in a film with any other member of the cast of 'The Lord Of The Rings'!
11. Who has Anthony Kiedis famously compared Chili Peppers supporters and friends The Mars Volta to several times?

Seeing The Mars Volta play live, Kiedis has often stated, is how he imagines people must have felt when they saw a young Led Zeppelin play at the end of the 60s.
12. Complete this lyric: 'Let's make evil, let's make good / I'd do...'


Answer: Anything I could

These lyrics are from the song 'Let's Make Evil', arguably one the best songs recorded during the 'One Hot Minute' era. It can be found as a B-side on the single for 'My Friends'.
13. Which of these albums does NOT feature a single cover song?

There are cover songs on the other three albums - 'Hollywood (Africa)' and 'If You Want Me To Stay' on 'Freaky Styley' (you could also argue that 'Yertle The Turtle' is a cover), 'Subterranean Homesick Blues' on 'The Uplift Mofo Party Plan' and 'They're Red Hot' on 'Blood Sugar Sex Magik'.
14. In the video for 'Catholic School Girls Rule', a T-shirt with a band logo is briefly shown - which band is it?

Although only shown for a microsecond, a green Meat Puppets shirt is seen briefly in the video. Recently, Anthony has been seen wearing the same shirt, now ripped and well-worn, in public.
15. Which of these artists has John Frusciante NOT covered live at a Red Hot Chili Peppers show?

John has covered Elton John's 'Tiny Dancer', Gary Glitter's 'Good To Be Back', and The Chantels' 'Maybe', but nothing by Whitney Houston.
16. What was the name of the short film made by Johnny Depp about John Frusciante's apartment during the period in which he was severely addicted to drugs?

The film 'Stuff' is one of the rarest pieces of film related to the Chili Peppers ever made. The only rarer piece of film is possibly the rumoured documentary made during the recording of 'One Hot Minute', which has never surfaced.
17. Which member of Rage Against The Machine has Flea collaborated with in the past?

Flea collaborated with Morello, along with Henry Rollins and Bone Thugs N Harmony on a cover of Edwin's Starr's classic 'War (What Is It Good For?)'. It can be found on the soundtrack to the movie 'Small Soldiers'.
18. Which company makes Flea's signature bass?

Flea usually uses Modulus equipment onstage, and he had a hand in designing the Modulus Flea Bass.
19. Complete the lyric: 'Into my life you were...'

This lyric is from 'Show Me Your Soul', a song from the 'Mother's Milk' era which can be found on the soundtrack to 'Pretty Woman', and also on 'What Hits!?'.
20. In the episode of 'The Simpsons' which featured the Peppers, what was Arik Marshall's only line?


Answer: Everyone can enjoy that.

'The Simpsons' fans for ever more will be under the impression that Arik Marshall was a more significant Chili Pepper than John Frusciante, seeing that it was he who appeared on the episode shortly after John left. The other three lines in the question were spoken by Flea, Chad, and Anthony.
21. Name John Frusciante's guitar technician.

If you ever find yourself backstage at a Chili Peppers concert, Dave Lee is said to be a friendly man - go talk to him, and he may just introduce you to John himself.
22. In which video does Flea's girlfriend Tobey Torres appear?

In the video for 'The Zephyr Song', Tobey Torres of Snake River Conspiracy appears as one of two identical-looking dancing girls.
23. How many studio albums had the Red Hot Chili Peppers released before they released "Stadium Arcadium"?

"Stadium Arcadium", released in 2006 is the band's ninth studio album.
24. Which of these artists has John Frusciante collaborated with in the past?

John played acoustic guitar on the song 'Personal Jesus', which can be found on Johnny Cash's album 'American IV: The Man Comes Around'. Nick Cave also features on the album, but on a different track.
25. Which of these names has a young Anthony Kiedis used when appearing in films?

Anthony's father John, an actor, goes by the name of Blackie Dammett, and Anthony called himself Cole when he still harboured dreams of thespian success.
Source: Author Elidir 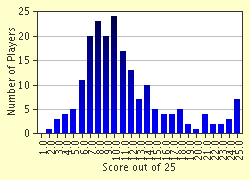 
Other Destinations
Explore Other Quizzes by Elidir