Elton John: What do these lyrics mean? Quiz

I'll give you the name of the song and a few unusual lyrics. You decide which definition matches the lyric.

Quiz Answer Key and Fun Facts
1. "First Episode at Hienton" Elton sang: "For the quadrangle sang to the sun, and the grace of our feeling, and the candle burned low..." What is this quadrangle?


Answer: an open-air courtyard within a building

There are additional references to the sky as a ceiling, and clouds in Valerie's eyes. This song, from "Elton John" utilizes some haunting synthesizer music to set a Victorian setting for the singer's first attempt at love-making.
2. "Ballad of a Well-Known Gun" Elton sang: "The Pinkertons pulled out my bags and asked me for my name..." Who or what were the Pinkertons?

Allan Pinkerton established a private detective and security agency in 1850. Pinkerton agents were hired to track western outlaws like Jesse James, the Reno Gang, Butch Cassidy and the Sundance Kid.
3. "Bennie and the Jets" Elton sang: "Bennie, she's really keen, she's got electric boots, a mohair suit, you know I read it in a magazine..." Mohair is a silky fabric made from the hair/fleece of which animal?

Mohair is notable for its lustre and the ease with which it takes a dye. However, Bennie probably regrets wearing her mohair suit under the stage lights as mohair is also very warm.
4. "Sartorial Eloquence" Elton sang: "You've a certain sartorial eloquence, and a style that's almost of your own..." What does sartorial mean?

Sartorial relates to tailoring or designing of clothing. Normally, the term describes elegance, but maybe in this case, the clothing is making a statement. The song was a minor hit, but the title was confusing, so the parenthetical "(Don't Ya Wanna Play This Game No More)" was added to make the title more recognizable.
5. "Someone Saved My Life Tonight" Elton sang: "And I would have walked head-on into the deep end of a river, clinging to your stocks and bonds, paying your H.P. demands forever..." What does H.P. stand for?

H.P. is short for "hire purchase," the British term for the practice where you can rent appliances such as a TV for a weekly fee; after some years of rental, you can buy it for a small amount, which people called "buying it on the H.P." It is practiced by persons who cannot afford the cost of the item new. In the States we call this rent-to-buy.

This wonderful song is about, among other things, Elton John's relief at not getting trapped in an early marriage that he feared would destroy his career and doom him to domestic drudgery. His depression at this time led to a poorly planned and probably half-hearted suicide attempt.
6. "The King Must Die" Elton sang: "Some men are better staying sailors, take my word and go, but tell the ostler that his name was the very first they chose..." What is an ostler?

An ostler is a stable or livery worker. The theme of the song is a confidant of the king is warning him a bloody coup is coming and encouraging him to leave. I suppose he might see the ostler if he attempted to take a horse to flee the castle and turn to being a sailor.

Caravan is British lingo for a trailer. Elton's place must be a real dump for the landlord to live in a caravan. I have to admit the first time I heard it I had visions of the landlady climbing out of bed, throwing on her robe and hopping atop a camel to cross the desert with traders.
8. "Pinball Wizard" Elton sang: "I thought I was the Bally table king..." What's a Bally table?

Of course Bally has been making pinball machines since 1932. The company name was taken from the name of the first game they manufactured which was called "Ballyhoo." This line is only included because it so often has been misheard as "veritable." The lyrics sheets that came with Greatest Hits Volume II" even showed the lyric as veritable, which was curious as Bally was already producing the Captain Fantastic pinball machine so there should have been no animosity between the parties.
9. "Porch Swing in Tupelo" Elton sang: "It' s a slow road on down That old Natchez Trace, through Alabama cotton fields to a state of Grace..." To what does Natchez Trace refer?

The Natchez Trace is an ancient American Indian trail that runs 440 miles from Natchez, Mississippi to Nashville, Tennessee. The trail was utilized by early explorers and traders and probably followed game trails that ran between the Mississippi, Tennessee and Cumberland rivers.
10. "Billy Bones and the White Bird" Elton sang: "Oh, your majesty, your majesty, I heard the bosun cry..." What's a bosun?

Bosun is a variation of boatswain. On merchant ships, the bosun oversees the cargo and other areas not supervised by the engineering crew. On older sailing ships, the bosun would take care of the anchors, ropes, and rigging.
Source: Author dbb 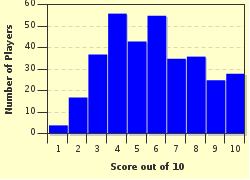 
Other Destinations
Explore Other Quizzes by dbb