In the World with Elton John Trivia Quiz

Visit the world within the songs of Elton John.

The song 'Daniel' is from Elton's 1973 album "Don't Shoot Me I'm Only the Piano Player". It peaked at Number four in the UK charts and Number two in the USA.
2. The opening lines of the song "Island Girls" read ... 'I see your teeth flash Jamaican honey, so sweet. Down where Lexington cross _______'. Which street does Lexington cross?

"Island Girls" was from Elton's 1975 album "Rock of the Westies".
'Main Street' is the title of a Bob Seeger song.
'52nd Street' is by Billy Joel
'59th Street Bridge Song (Feelin' Groovy)' is by Simon and Garfunkel.
3. Elton John's 1981 album "The Fox" contained a track with a European country within the title "Just like _______". Name the European country

The movie "If it's Tuesday it must be Belgium" was a romantic comedy released in 1969 and starred Suzanne Pleshette and Ian McShane. For an extra bit of trivia, folk singer Donovan (of 'Sunshine Superman' fame) made a cameo appearance and sang his own composition 'Lord of the Reedy River'.
4. The title of this track from Elton John's 1969 album "Empty Sky" is the name of a place that is also known as the 'Hall of the Slain'.

'Asgard' is the home of the Aesir, the Warrior Gods, and sits at the highest level of the Norse universe. Valhalla (pronounced Val-Hala on the album) is also on this level.
'Mount Olympus' is the heavenly home of the Greek Gods.
'Uluru' (also known as Ayers Rock) is a sacred site to the Pitjantjatjara and Yankunytjatjara aboriginal people of central Australia.
5. The last track on Elton's 1982 album "Jump Up" is also the title of which famous war novel by Erich Maria Remarque?


Answer: All Quiet on the Western Front

'The Battle of Dorking' (1871) was written by George Tomkyns Chesney.
'The Invasion of the United States' (1916) was by H. Irving Hancock and 'The Moon Men' (1925) was written by Edgar Rice Burroughs.
6. Elton's 1975 album "Captain Fantastic and the Brown Dirt Cowboy" contains a song that's title is a place with Biblical significance.

'It's party time for the guys in the Tower of Babel
Sodom meet Gomorrah
Cain meet Abel
Have a ball y'all'
7. Which place is Elton John referring to within the following lyrics: '______ ain't the kind of place to raise your kids (in fact it's cold as Hell)'?

The song is 'Rocket Man' and is from one of Elton's more critically acclaimed albums "Honky Chateau" (1972). The song peaked at Number two in the UK and Number six in the USA.
8. In 1974, on the "Caribou" album, Elton John pines for a drink at the "Skinner's Arms" in which English town?

There was a trick here. Grimsby is also the title of the song; however, all my research could not uncover a 'Skinner's Arms' in Grimsby. Perhaps there was one when Bernie Taupin penned the lyrics or perhaps it was 'poetic license'.
On the other hand, London, Essex and Hexham, each are home to a 'Skinner's Arms'.
9. Where, in the Caribbean, did Elton and his band go to to originally record the 1973 album "Goodbye Yellow Brick Road"?

The idea came after The Rolling Stones had successfully completed their album "Goat's Head Soup" on the island, however, technical difficulties saw Elton and the band shelve the idea.
10. What completes the blank in the following Elton John song title: "__________ Freedom"?

This song was dedicated to tennis player Billie Jean King who, in 1974, coached a World Team Tennis team called the 'Philadelphia Freedoms'. The 'B' side of the single was a duet of with John Lennon of the Beatles hit 'I Saw her Standing There'. 'Chimes of Freedom' is a 1964 song by Bob Dylan from his album "Another Side of Bob Dylan". 'Songs of Freedom' was recorded by Santana in 1987. Bob Marley is also linked to this title, however, it is merely a line from his often covered 'Redemption Song' and also the title of a retrospective package of hits released in 1992. 'Cry Freedom' is not a song title (that my research can uncover) but the title of a movie released in 1987, directed by Richard Attenborough, and depicts the story of Steve Biko.
Source: Author pollucci19 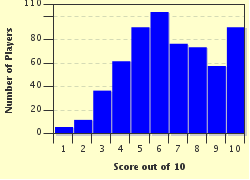 Related Quizzes
This quiz is part of series Poll's Itinerary:

Got your tickets... here's your chance to see the world from your desktop. Don't forget the postcard!


1. Amazing Sites Average
2. In the World with Elton John Average
3. Rottnest Island, Western Australia Average
4. Once Upon a Time in... Scotland! Average
5. More Amazing Heritage Sites Around Australia Average
6. We Are The World Average
7. For Your Eyes Only Average
8. Group of Seven Psychopaths Average
9. As the World Burns Average
10. On the Left You'll See ... Average
11. Think Pink Tough