This quiz will test your knowledge of one of Elton's best and undoubtedly his most famous album, "Goodbye Yellow Brick Road." Good Luck!

Quiz Answer Key and Fun Facts
1. Which of the following songs on the "Goodbye Yellow Brick Road" album reached number one on the R&B charts?


Answer: Bennie and the Jets

The lyrics in this refrain are somewhat difficult to understand. For quite a while, this part particularly troubled me. How did you do?
3. Which song on the album is entirely instrumental?


Answer: Funeral for a Friend

This song is frequently the opening number in Elton's concerts.
4. The song "Jamaica Jerk Off" was actually recorded in Jamaica.

Elton and the band did attempt to record some tracks in Jamaica, however, their trip to Jamaica did not go well and the never recorded.
5. Which of the following songs does not draw heavily on imagery of pop culture icons?


Answer: This Song Has No Title

This one's a little tricky. "Roy Rogers" is about (obviously) Roy Rogers. "Candle in the Wind" is a tribute to Norma Jean (Marilyn Monroe). The tricky one is "Goodbye Yellow Brick Road." This song, though not a tribute, leads the listener to thoughts of Judy Garland or "The Wizard of Oz".
6. Here's a tricky one! Who is responsible for the string arrangements in "The Ballad of Danny Baily (1909-34)"?

His work is also evident in many other songs on the album.
7. Which famed lyricist penned all the lyrics to the "Goodbye Yellow Brick Road" album?

"Harmony" was nearly released as a single from the album and was a B-side twice.
9. Which song is about prostitutes?

This song is a rather cheerful ballad of a house of ill repute that sailors frequent.
10. Which of the following is not on the "Goodbye Yellow Brick Road" album?


Answer: Teacher I Need You

"Teacher I Need You" is on "Don't Shoot Me, I'm Only the Piano Player" album.
Source: Author james_israel 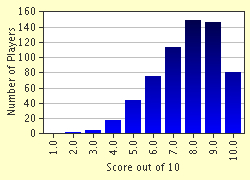 
Other Destinations
Explore Other Quizzes by james_israel