Places on the map turned up in Rolling Stones lyrics over the decades. See if you can recall these locales with these song clues. Let's travel!

Share on Facebook
Share on Twitter
Share by E-Mail
Author
oscarguy
Time
4 mins
Type
Multiple Choice
Quiz #
133,679
Updated
Dec 03 21
# Qns
10
Difficulty
Average
Avg Score
7 / 10
Plays
1907
This quiz has 2 formats: you can play it as a or as shown below.
Scroll down to the bottom for the answer key.

Quiz Answer Key and Fun Facts
1. Let's start easy! The streets of this town are a little too sleepy for a "Street Fighting Man."

"Street Fighting Man" was released around the time of the Democratic Convention riots in 1968 and was subsequently banned by many radio stations. Changing sentimentality after three decades made "Street Fighting Man" the opening number at many of the 2002-2003 "Forty Licks" tour.
2. Take a trip and get your kicks on this famous U.S.highway, sung about on the Stones' cover of Bobby Troup's classic tune.

"Route 66" appeared on "The Rolling Stones", the first U.S. Stones release. "Route 66" has been recorded by the divergent likes of Nat King Cole and Depeche Mode. The tune has turned up regularly on live playlists for 40 years.
3. This promo guy in a toupee and seersucker suit was sitting at a bus stop, but in the downtown section of what city?

He's "The Under Assistant West Coast Promo Man." This is also the title and tune from the flip side of the "Satisfaction" single in 1965.
4. In a case of mistaken identity, the police in this city put a bullet through a poor boy's heart.

This sad and tragic tune is listed as "(Doo Doo Doo Doo Doo) Heartbreaker" on 1973's "Goat's Head Soup." The boy was being chased through the park -- presumably Central Park.
5. Mick was driving through California listening to country music on the radio when he heard a preacher looking for donations. The head Stone was looking to meet up with his girl whose eyes had a certain peculiar quality. Where was he that he pulled in this radio station?

Bakersfield, an agricultural town between Los Angeles and Las Vegas, is an unlikely place for Mick to be driving. But he tells us all about it in "Far Away Eyes", from the "Some Girls" album. Mick's vocal here is an amusing American "cowboy drawl".
6. Mick leads the rest of the Stones in warning a well-to-do London girl in "Play with Fire" that her upper-class status does not give her immunity to Mick's wrath. Which of the following London areas is not mentioned in the song?

At the time "Play with Fire"was recorded, the communities mentioned in the song were included to illustrate the girl's wealth and status. Paddington, however, was not one of them. From "Out of Our Heads" lp.
7. "Too Much Blood" is a grim story of mutilation, dismemberment, and cannibalism. The remains of the unfortunate girlfriend was found in a park by a taxi driver. In what city was the park?

The park is Bois de Boulogne in Paris proper. The song is not for the squeamish, unless you are unfazed by a head in a refrigerator. From 1983's "Undercover"lp.
8. The very famous gin-soaked barroom queen who will blow your nose then blow your mind was discovered in what town (according to the original studio version)?

Memphis, Tennesse is where she was originally discovered. She's the legendary woman in "Honky Tonk Women". The bar in question changes location from time to time in live versions. It is pretty much guaranteed that "Honky Tonk Women" will be one of the numbers at any Stones concert you attend.
9. Pleased to meet you. I hope you guess the two cities mentioned in this song about a diabolical figure who caused a lot of trouble.

The lyrics come from "Sympathy for the Devil" from "Beggar's Banquet" lp.
10. The Gold Coast slave ships in this song were headed to a market in this city during a grim chapter in U.S. history.

The song is "Brown Sugar" from the "Sticky Fingers" lp -- the first album released on the Rolling Stones label. The song is one of the best ever written and recorded, yet it is about the atrocity of slavery, interracial relationships, and blatant sex. Great song, though.
Source: Author oscarguy

This quiz was reviewed by FunTrivia editor Dalgleish before going online.
Any errors found in FunTrivia content are routinely corrected through our feedback system.
Most Recent Scores
Jan 01 2023 : Guest 206: 7/10
Dec 28 2022 : Jannutta: 3/10 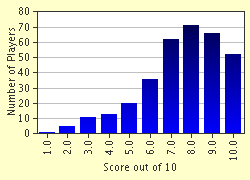 
Other Destinations
Explore Other Quizzes by oscarguy