Stones Quiz for the Cynic

I'm a huge Rolling Stones fan. Really. Truly. But they're rock stars, and they've made a living by acting like rock stars. Just how much do you know about their quirky, bizarre, or sordid exploits?

Quiz Answer Key and Fun Facts
1. Which of the following unlikely artists has never opened for the Stones in concert?

The Black Eyed Peas opened for the Stones at Fenway Park in the kickoff of their 2005 tour. Beck opened for them in Toronto, later that year. Sheryl Crow has opened for the Stones a number of times, including several shows in 2002.
2. Speaking of opening for the band, which of the following artists attempted on consecutive nights in 1998 to open a concert for the Rolling Stones, only to be chased off of the stage both times by a barrage of thrown items?

On March 29, 1998, Meredith Brooks attempted to open for the Stones in Argentina, only to be chased from the stage by boos and projectiles. The following night, Brooks was only able to perform two songs before leaving.
3. Okay, so we're familiar with the concert in which the Rolling Stones used the Hell's Angels as security guards, and sadly but somewhat predictably, tragic violence ensued. But just where was that nefarious concert?

One of the problems with the tragic Altamont concert was the venue--because of concerns about the size of the crowd, it was moved from San Francisco to Altamont on less than a day's notice. This obviously left inadequate opportunity to plan security measures.
4. In 1970, the band recorded a single entitled "Schoolboy Blues" that would foreshadow one of the great problems to come for the music industry. What was the story behind that particular single?


Answer: The band was fed up with their current contract, and had only one song remaining to fulfill the terms of the contract, so they recorded an intentionally bad single that could never be released.

The Stones were on the Decca label at this time. Desiring to create their own record label, they "released" a vulgar, unreleasable single, thus fulfilling the terms of their record deal. Thankfully, artists and recording companies have had very few disagreements since...
5. Which of the following Stones has not been a member of the band for 40+ years, from the 1960's to the 2000's?

Jagger, Richards, and drummer Watts have been Rolling Stones since the band's inception (okay, technically, Watts joined in 1963--just after their inception). Wyman was an original Rolling Stone also, but he left the band in 1991.
6. Stones' intimate Tony Sanchez wrote a book that popularized an urban legend about Keith Richards' well-chronicled drug use. What was the rumor?


Answer: Keith was unable to perform in the upcoming Berne, Switzerland leg of the 1973 tour due to drug overuse. The band's purported solution was to fly in a doctor to give Keith a complete blood transfusion, resulting in his being healthy and able to perform.

In case you're impressionable, a complete blood transfusion is unlikely, and is certainly not recommended for any musician who plans to tour two days later.
7. Which of the following is not the lead-in for one of the Stones' "best hits" albums?

"A Bigger Bang" was the name of the Stones' 2005 album. The other three were greatest hits compiliations from various periods in the band's history.
8. You probably know that the Stones performed the halftime show for Super Bowl XL. But which of the following was not one of the three songs they played in that set?

As part of this performance, Mick had to agree to a five-second microphone delay for censorship purposes. He had his microphone muted twice during the show.
9. In May 2006, the Stones had to postpone a European tour. What was the reason given for this postponement?


Answer: Keith fell out of a coconut tree and injured himself.

As the cliche goes, truth is stranger than fiction.
10. Which of the following band members had the shortest tenure with the group?

Stewart played piano for the Stones from 1962 until his death in 1985, though his role continually diminished. Jones was also an original Rolling Stone, but was estranged from the band in 1969 shortly before his death. Taylor began working with the Stones in 1969, and ultimately left in December 1974. Wood joined the band after Taylor's departure in 1975, and has remained with them into the 2000's.
Source: Author avrandldr 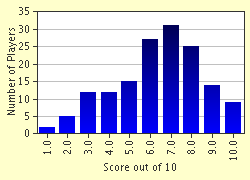