Grateful Dead trivia from the 1970s.

Quiz Answer Key and Fun Facts
1. Where was the Grateful Dead's first show in Europe played?

The Dead played the Hollywood Festival in Newcastle on May 24th, 1970. It was their first venture into Europe.
2. In August of 1971 the band played a benefit concert at the Terminal Island Correctional Facility in San Pedro, California. Who was the benefit for?

Owsley Stanley, one-time chemist and sound engineer for the Grateful Dead was the beneficiary.
3. Relix Magazine debuted as "Dead Relix" in what year?

Dead Relix emerged from the early tape trading underground in 1974. It was published on the east coast, but initially concentrated on the Bay Area music scene.
4. The year 1970 saw the Grateful Dead play more shows in one year than ever before or since. How many shows did the band play that year?

The band played a free show on May 13, 1972 at Lille, France. It was between gigs in Rotterdam and Luxembourg.
6. Where was Pigpen's last show with the Grateful Dead?

Pigpen last appeared onstage June 17, 1972 at The Hollywood Bowl. He died in March of 1973.
7. Janis Joplin and Pigpen shared the same "drink of choice". What was that drink.

Pigpen and Janis Joplin both liked to drink Southern Comfort straight out of the bottle, and both paid for it.
8. When the Dead was busted by the New Orleans PD in 1970 they were forced to cancel a show scheduled for that evening.

False. The band played on, appearing at The Wharf in New Orleans the evening of the bust.
9. Jerry Garcia and Robert Hunter were a prolific writing team. Who is Bob Weir's main writing partner?

Barlow and Weir first hooked up as teenagers in Colorado. They have been writing together since the early 70's.
10. What year did Winterland Arena close?

Winterland closed after the New Year's Eve show on December 31, 1978. The evening featured The Blues Brothers, New Riders of the Purple Sage, The Grateful Dead, Bill Graham flying in on a giant joint, and breakfast at dawn.
11. On October 20, 1974 the Dead played a "farewell concert" at Winterland before taking a 20 month break. What was the last song played?


Answer: We Bid You Goodnight

The band went on their hiatus by bidding everyone goodnight. This was Mickey Hart's first show back after his self imposed exile.
12. During their hiatus the Grateful Dead only played four times in public (all in 1975). Which of the following venues was NOT played in '75?

The Band played the SNACK benefit at Kezar Stadium, the Bob Fried Memorial Boogie at Winterland, two other shows at the Great American Music Hall and Golden Gate Park, but not at the Fillmore.
13. In June of 1976 the Dead returned. Where was the first show?

The band returned from their hiatus with two shows at the Paramount Theater in Portland. That kicked off a month long Summer tour.
14. What was the first song played in the return?

The band figured they might as well return.
15. Bobby Hi-Test and the Octane Kids, a Dead cover band in the 70's, produced which future member of the Grateful Dead?

In 1974, Bruce Hornsby and his brother Bob formed the Octane Kids at the University of Virginia.
16. What year was "The Grateful Dead Movie" released?

The band's own movie. Released on June 1, 1977. It was a documentary of the group's Winterland shows.
17. On November 11, 1978 the Dead made their first appearance on "Saturday Night Live." Which of the following songs did they NOT play that night?


Answer: Friend of the Devil

The Band appeared right before starting a tour in Boston.
18. During the 70's members of the Grateful Dead began to spread their wings and start projects outside the band. In which of the following bands did Jerry Garcia NOT play in the 1970's?

The Jerry Garcia Acoustic Band did not come onto the scene until 1987. Garcia sang and played banjo or guitar in the other three bands during the 1970's.
19. Match the 1970's project with the corresponding member of the Dead. Whose project was "Seastones"?

"Seastones" was an album of electronic music released in 1975 by Phil Lesh and Ned Lagin. The pair also played as "Warp Ten" at 23 Grateful Dead shows in 1974.
20. Whose project was "Rolling Thunder"? 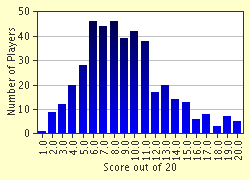 
Other Destinations
Explore Other Quizzes by ashlybug