Led Zeppelin were orginally known as The New Yardbirds.
2. What was the name of Led Zeppelin's famed tour jet?

"Led Zeppelin IV" does not have an official album name nor is Led Zeppelin given credit for the album.
4. In what year did Led Zeppelin drummer John Bonham die?

John Bonham drank himself to death in 1980.
5. Which member of Led Zeppelin had the nickname "Bonzo"?


Answer: In Through The Out Door

The band broke up after this album was released and John Bonham died.
7. What Led Zeppelin album name is also a song on Disc One of "Physical Graffitti?"


Answer: Houses Of The Holy

"Houses of The Holy" featured such great songs as "The Song Remains The Same" and "Over The Hills And Far Away."
8. Why was "Houses Of The Holy" banned in some European countries?


Answer: There was nudity on the cover.

While the sex of the people is not clear, there is still nudity on the cover.
9. Which song did Robert Plant write because he was an avid "Lord Of The Rings" fan?


Answer: The Battle Of Evermore

There have been claims that if you play "Stairway to Heaven" backwards there is a Satanic message.
10. What Muddy Waters album inspired the song "Black Dog"? 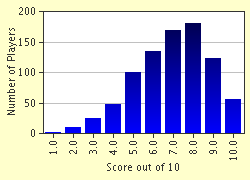 
Other Destinations
Explore Other Quizzes by guitarninja90