Hammer of the Gods 3 Trivia Quiz

My next quiz will be "untitled"

Quiz Answer Key and Fun Facts
1. On January 12, 1995 when the three surviving members of Led Zeppelin were to be inducted into the Rock n Roll Hall of Fame, Jimmy and Robert couldn't agree on which drummer to use. Who filled the late John Bonham's seat that night?

No need to mention who Jason Bonham is, Michael Lee was part of the Unledded band, Chris Slade was with Page in The Firm and Jim McCarty goes back to the Yardbird days before Led Zeppelin.
2. What record label did Jimmy Page work for as staff producer?

Andrew Oldham, the Stones' manager who had the label, hired him.
3. At which venue did the New Yardbirds play their last date?

Three nights later they played at the Marquee in London billed as "Jimmy Page with the New Yardbirds." Their eventual London debut as Led Zeppelin was at the Roundhouse in Chalk Farm.
5. In 1972 what percentage of total sales did Led Zeppelin account for with Atlantic Records?

An obscure question yes, and although Led Zeppelin had released no recordings the previous year the previous four albums were selling well. In years to come that figure would grow to almost 30 percent.
6. What was the nickname given to the second album?

Released on October 22 1969, The Beatles had just released "Abbey Road" and the Stones had put out "Let it Bleed". In spite of "Led Zeppelin II's" heavy competition, it entered the charts at Number 199 and jumped the following week to Number 25. For a month it sat at number two.

But by late December it had displaced "Abbey Road" as the number one album in America. Bigger than The Beatles!
7. Which city did Led Zeppelin make its American debut?

Still a new band on the scene, they weren't even listed on the bill.
8. With which band did Led Zeppelin finish its first American tour opening for?

After a half a dozen encores by the time Led Zeppelin finished their show with "Train Kept A-Rollin", Iron Butterfly refused to go on, realizing that Led Zeppelin had left them nothing.
9. For extra reverberation, what did John Bonham line his bass drum with?

He was also playing with the biggest bass drum available, a massive 28 inches in diameter.
10. The book "Hammer of the Gods" was first published in 1985. When was it first updated with the additional chapter?

The additional chapter is titled "Led Zeppelin in the square of the Dead".
Source: Author Nerrad 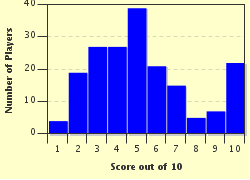 
Other Destinations
Explore Other Quizzes by Nerrad