I'll name something about the album, you tell me which one it is.

Quiz Answer Key and Fun Facts
1. Which one of these Led Zeppelin albums was a double album?

"Physical Graffiti" is "Guitar World's" ninth best guitar album of all time, beating Pink Floyd's "The Wall". It features hits like "Kashmir" and "Trampled Under Foot".
2. Which Zeppelin album cover features no words or markings and has no pronounceable name?

Otherwise called "Zoso" after the symbol Jimmy Page put on it for his astrological signs. The album's real name are the four symbols. Robert Plant's is the Feather of Ma'at. John Bonham's is the three overlaping circles, from his favorite beer and John Paul Jones' is the overlapping triangles.
3. What is the album that was packed in brown paper bags?


Answer: In Through The Out Door

The album had six different album covers. The picture of just the top of a cardboard box with a string was one of them.
4. Which of these Zeppelin albums is not on the "Rolling Stone" 500 Best Albums of All Time list?

Led Zeppelin III in my opinion is a very undervalued album. It has on it "The Immigrant Song", "Gallow's Pole", and "Bron-Y-Aur Stomp", all very good songs.
5. Which of these features the airship Hindenburg going down?

The doomed German airship, Hindenburg. Its silhouette is featured on Zeppelin II also. Most Zeppelin fans should get this right. Check out my other quiz on the Hindenburg.
6. Which album does Sandy Denny appear on?

Robert Plant asked her to help him with "The Battle of Evermore". She said yes and Robert showed her how to do the "ooooooooh dance in the dark of night".
7. Which album did Jimmy Page produce?

Jimmy produced all the Zeppelin albums primarily because he started the band. He even had a studio in his house.
8. How many albums were produced under Swan Song Records?

Jimmy Page's own record company. "Physical Graffiti", "In Through The Out Door", "Coda", "Presence", and "The Song Remains the Same" were produced under the "Swan Song" logo.
9. Which album is a compilation of previously unreleased material?

"Coda" was compiled by Jimmy Page and released in 1982.
10. Which album only hit Number four in the UK?

Most of Zeppelin's others albums hit Number one in the UK.
Source: Author physicsmaster 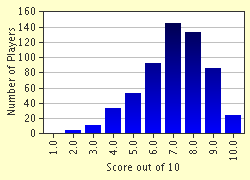 
Other Destinations
Explore Other Quizzes by physicsmaster