The Life and Times of Peter Grant Quiz

How much do you know about Led Zeppelin's legendary manager Peter Grant?

Quiz Answer Key and Fun Facts
1. In which year was Peter Grant born?

Peter was born on April 5, 1935, in south London. He grew up with his mother Dorothy; he never met his father to anyone's knowledge.
2. Peter had two children with his wife Gloria. What did they name them?

Peter Grant, Led Zeppelin's manager, was a very good father to his children. When their mother left Peter for another man in 1976, Peter looked after the children himself, taking on the mantle of both father and mother.
3. Before getting fully involved in music management and promotion, Peter had a stint at professional wrestling. What was his ring name?

Why Peter chose this name is anyone's guess. Apparently Peter was quite successful, owing probably to his significant weight advantage.
4. Which American actor did Peter double for in the movie "The Guns of the Navarone"?

Peter had a lot of bit parts in the movie industry during the 50's and early 60's, namely 'Cleopatra'. He also played parts in a lot of British action dramas such as 'The Saint', starring Roger Moore.
5. Which infamous rock manager and promoter did Peter begin working for in 1963?

Don Arden employed Peter to tour manage visiting American acts such as Gene Vincent, Eddie Cochran, and the Everly Brothers.
Arden was a ruthless businessman; he taught Peter a lot about the rock management business. Arden's daughter also went into rock management and became the manager and wife of a certain Ozzy Osbourne.
6. Which British band did Peter take over the management of in 1967?

This was the beginnig of Peter's rise in fame and fortune. When Peter took over from Simon Napier-Bell, Simon told him to keep an eye on the guitarist: "He can be trouble", he said.
The guitarist in question? Mr Jimmy Page.
7. When the Yardbirds disbanded in 1967, Jimmy Page was left with the name; he told Peter he needed to find a singer, bass player, and drummer to honour previously booked concerts in Scandanavia. Which member was recruited first?

John had met Jimmy several times while both playing sessions in the mid sixties. He was getting bored with sessions, so his wife, Mo suggested he give Jimmy a ring after seeing his ad in a music paper requesting a bass player for the New Yardbirds he was forming.
8. Why was Peter slightly nervous about telling Led Zeppelin about their first U.S. concerts?


Answer: They would have to miss Christmas day with their families

Led Zeppelin performed their first U.S. concert in Denver on December 26; this meant they had to fly out on the 24, missing Christmas Day. Everybody say "Ahh!"
9. Which major rock band did Peter manage alongside of Led Zeppelin in the 1970's?

Fronted by ex 'Free' singer Paul Rodgers, Bad Company was signed to Zeppelin's label 'Swan Song' and had massive success, especially in America.
10. On the 1977 Led Zeppelin tour of America, Peter, John Bindon, and John Bonham were arrested for what incident?


Answer: They seriously beat up an employee of Bill Graham

The altercation was very serious at the time; the employee in question had slapped Peter's son Warren for playing around backstage, which understandably incensed Peter, who, along with the others, gave the man a serious beating. Charges were pressed by Bill Graham, but predictably they were let off with a small fine.
11. At which Led Zeppelin concert did Peter have the aerial photographs of the crowd sent to NASA, so that they could give an accurate assessment of the size of the crowd?

Peter wasn't satisfied with the promoter's figure for the attendance;
he thought he was being short changed and he was right. NASA estimated that there were 210,000 at the first concert, as opposed to the promoter's 180,000 estimate.
12. What present did Peter have delivered via helicopter for his son Warren's sixteenth birthday?

The story goes that the helicopter arrived with the Harley hanging by a steel cable about 200 feet up; the cable snapped and the bike landed on the lawn, smashing into pieces. The helicopter pilot made the fatal mistake of landing; he was met by a rampaging Peter Grant, who tipped the chopper on its side, the still-whirling blades gouging chunks from the lawn and destroying the wooden fence. Now that's what every sixteen-year-old wants for their birthday.
13. After the demise of Led Zeppelin in 1980, Peter eventually retired to the quiet and sedate English town of Eastbourne. What civic posistion was Peter offered by the council of Eastbourne?

Peter thought this hilarious considering his shady past. Understandably, he turned it down.
14. In 1989 Peter renewed his friendship with Jimmy Page by taking him to see which artist at the Royal Albert Hall?

Sinatra was a favourite of both Peter and Jimmy. Peter still owned a private box at the Albert Hall, where he boasted that he could still smoke cigars and get away with it.
15. In what year did Peter sadly die?

Peter died on the November 21 from a heart attack, aged 60. At the funeral his close friend Alan Callan said "His greatness was that he was a man of many parts. He was adept at the ominous glance as he was at the dis-arming remark. He could engage you in the greatest conspiratorial friendship and you would know through thick and thin he would fight for you all the way, unless of course he thought you may appreciate the humour of a sudden change of plan".
Source: Author zosimos 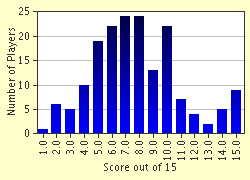 
Other Destinations
Explore Other Quizzes by zosimos