Led Zeppelin are one of the most famous rock bands of the 20th century. Here is a quiz about each one of their albums.

Quiz Answer Key and Fun Facts
1. Led Zeppelin's first album, imaginatively entitled "Led Zeppelin", was released in 1969. The sleeve of the album featured a picture of which famous airship?

Led Zeppelin were formed in 1968 and began work on their eponymous debut album within weeks of getting together. The album features the song "Dazed and Confused", which became a feature of their live sets throughout their existence. The sleeve art features the Hindenburg airship bursting into flames - this incident happened at Lakehurst, New Jersey, in 1937.
2. The band didn't waste any time recording their second album, "Led Zeppelin II" being released later in 1969. What is the opening track on this album, which would go on to become their only top ten single on the Billboard chart, as well as an enduring live favourite?

Led Zeppelin never released any singles in their native UK, but "Whole Lotta Love" appeared on 45 rpm format in the USA. It reached number four on the Billboard Hot 100 in 1970. The only other charting single off the album was "Living Loving Maid". "Led Zeppelin II" was the first album by the band to reach number one in the UK.
3. Led Zeppelin's third album, released in October, 1970, was called, yes, you guessed it, "Led Zeppelin III". What was the name of the song on the album that contains references to the Vikings, with lyrics such as "To fight the horde and sing and cry, Valhalla, I am coming"?

"Immigrant Song" was released as a single just about everywhere other than the UK. The lyrics were inspired by a visit that the band had made to Iceland during their 1969 live tour. "Led Zeppelin III" included more acoustic numbers than its two predecessors.
4. The fourth studio album released by Led Zeppelin was unusual in that it didn't have an official title - among the names it is known by are "Four Symbols", "Led Zeppelin IV" and "Runes". Which song on the album, probably the most famous Zeppelin song ever, contains the lyrics "If there's a bustle in your hedgerow, don't be alarmed now, it's just a spring clean for the May queen"?

"Stairway to Heaven" was the most requested song on FM stations in the USA during the 1970s, and is regularly listed near the top of polls of "greatest songs ever". The song was never released as a US single due to its length, but two other songs from the album were - "Black Dog" and "Rock and Roll".
5. In 1973, Led Zeppelin released their fifth album, and the first with a unique title, "Houses of the Holy". Which song on the album was reggae-influence?

"D'yer Maker"/Jamaica - get it? The song made the Billboard top 20. Among the tracks on the album that became live favourites were "The Rain Song" and "No Quarter".
6. "Physical Graffiti", released in 1975, was the only studio double album recorded by Led Zeppelin. Which stand-out track on the album contains the lyrics "All I see turns to brown, as the sun burns the ground and my eyes fill with sand, as I scan this wasted land"?

"Kashmir" took around three years to write, and was inspired by a trip to Morocco, a long way from India! The song became a part of just about every Zeppelin live set. "Physical Graffiti" was the first album recorded on the band's own Swan Song label.
7. "Presence", Led Zeppelin's seventh studio album, was released in 1976. What was the name of the album's opening and longest track, whose title contains the name of a Greek mythical hero?

The song's lyrics actually have nothing to do with Achilles. The song, one of the longest Zeppelin tracks, became a live favourite. "Presence" had a famous sleeve which featured a family sitting around a table, upon which sat a mysterious black obelisk-like object.
8. The eighth Led Zeppelin album, and the last to contain entirely new material, was the 1979 issue "In Through the Out Door". Which track had a samba beat influenced by the 1978 soccer World Cup in Argentina?


Answer: Fool in the Rain

Robert Plant and John Paul Jones wrote "Fool in the Rain" while watching the World Cup on TV. The song reached number 21 on the Billboard chart. The original vinyl version of "In Through Out The Door" came with six different sleeves, and appeared in the shops wrapped in a plain brown paper cover so that fans didn't know which version they were buying!
9. Following the tragic death of drummer John Bonham in 1980, Led Zeppelin disbanded, but one more studio album was released, "Coda", mainly featuring outtakes that had failed to make it onto their previous albums. Which track from the band's first "Led Zeppelin" album appears on "Coda" in live form?


Answer: I Can't Quit You Baby

The live version of "I Can't Quit You Baby" which appears on "Coda" was recorded way back in 1970. Three tracks on the album were released as singles in the USA - "Darlene", "Ozone Baby" and "Poor Tom".
10. No more studio albums by Led Zeppelin then, but they did release one live/soundtrack album, in 1976. What was the title of this album which shares its name with a track on one of Zeppelin's earlier albums?


Answer: The Song Remains The Same

The band made a half live/half fantasy movie in 1976, and released an album of the live material. The album contains some extra-long versions of their songs, including a near-27 minute version of "Dazed and Confused", and a version of "Whole Lotta Love" that extends to nearly 15 minutes.
Source: Author Dizart 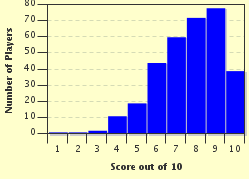