This is the second installment in my Led Zeppelin quiz trilogy. Therefore, it deals mainly with the middle years of the band. Good Luck!

Quiz Answer Key and Fun Facts
1. 1971 saw the release of "Led Zeppelin IV". By what other title is this record known?

Because of negative press reviews and articles about the band, Zeppelin decided to release their fourth album with no band name or album title printed on the cover. Printed instead were four symbols, each one representing a band member. Even without the band's name on the cover the album sold in the millions.

The word "Zoso" was actually a design that guitarist Jimmy Page made up as his symbol. This album includes such Zeppelin classics as "Black Dog", "Rock and Roll", and, of course, "Stairway to Heaven".
2. What song do these lyrics come from: "If you go down in the streets today, baby, you better, you better open your eyes."?

A great song from "Led Zeppelin IV". John Bonham shows in this song why he got a reputation for being rock's hardest hitting drummer.
3. What Zeppelin song begins with these spoken words: "We've done four already but now we're steady and then they went...one, two, three, four..."?

That song isn't even on the album. It was released two years later on "Physical Graffiti".
5. What band released the first album on Led Zeppelin's Swan Song record label in 1974?

Zeppelin left Atlantic Records and formed their own record label, "Swan Song" in 1974. The first album released under this label was Bad Company's self-titled debut which included the #1 hit "Can't Get Enough". Atlantic took quite a blow when they lost Zeppelin and the Rolling Stones(who formed Rolling Stones Records in 1971).

Besides Led Zeppelin and Bad Company, other Swan Song acts included, The Pretty Things, Maggie Bell, Dave Edmunds and Detective.
6. What was the first year that did not see a major tour by Led Zeppelin?

The band toured almost constantly from 1968-1973, finally taking a break in 1974. During that year, Page made a few guest appearances onstage with Bad Company.
7. Who once called Jimmy page the most overworked guitarist in rock?

Richards and the other Rolling Stones members were astonished at what Page was able to accomplish, being the only guitarist in a guitar-heavy band and producing all the albums himself. In response, Page flatly stated, "I would love to add another guitarist but it just wouldn't look right to the audience."
8. When Zeppelin released their first double album, "Physical Graffiti" in 1975, it and all of their previous albums wound up on Billboard's Top 100 albums chart.

That's almost too hard to believe but it's true. Six albums on the charts at once!
9. Led Zeppelin never had a #1 single.

They probably would've had several #1 hits but the band (especially Page) didn't believe singles were a good way to show what they were trying to do. They preferred that fans buy and listen to the whole album. They did, however, release a few singles. The song "Whole Lotta Love" was their highest chart success at #4.
10. What song from the "Physical Graffiti" album did singer Robert Plant, at one time, refuse to perform live?


Answer: In My Time of Dying

Plant and his wife were involved in a near fatal car accident in Greece on August 4, 1975. Plant says that while rolling around in the dirt after the crash, this song crossed his mind and he vowed never to sing it again. He later relented and has performed the song many times.
Source: Author malcolmsex 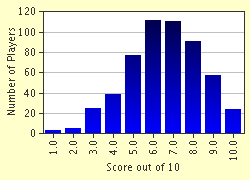