Here's a quiz on one of the hottest rock bands in history. It should be easy for any true Zeppelin fan. Good luck and have fun.

Quiz Answer Key and Fun Facts
1. What was the name of their first fully titled album?


Answer: Houses Of The Holy

Their first three albums were simply 1, 2, and 3. Their fourth didn't even have a title.
2. What was the group's highest charting American single?

"Whole Lotta Love" went to No.4 on the American Billboard charts. "Stairway To Heaven", ironically, was never released as a single due to its length. The song was exactly 8 minutes long which was considered too long to be a single then.
3. What was the original name of Led Zeppelin?

Jimmy Page was the guitarist for the Yardbirds. After they disbanded, he formed the New Yardbirds, bringing his tour manager, Richard Cole, with him. He selected singer Robert Plant, formerly of the Band of Joy and Hobbstweedle, drummer John Bonham, who played in Band of Joy with Plant. He also chose session bassist John Paul Jones.
4. What was their first album to go to Number 1 in America?

Their first album only hit Number 10. Their fourth album only made it to Number 2.
5. What was the longest song the group recorded?


Answer: In My Time of Dying

It was on the "Physical Graffiti" album, and was over 11 minutes long.
6. How many instrumentals did the group release on studio albums?

"Black Mountain Side" was from their first album; "Moby Dick", Bonzo's drum solo, from their second; and "Bron-Yr-Aur" from "Physical Graffiti".

"Bonzo's Montreux" is a drum solo by Led Zeppelin drummer John Bonham on "Coda", the compilation album, not a studio album.
7. When the group toured Denmark in 1970, why did they change their name to The Nobs?


Answer: Eva Von Zeppelin accused them of stealing her name

Eva Von Zeppelin threatened to sue if they used her "family name without permission".
8. Which of these is true about the classic "Stairway To Heaven"?

"Stairway To Heaven" was too long to be released as a single.
9. What controversy did the group face when they toured Oakland in 1977?


Answer: John Bonham, Peter Grant and one of their roadies assaulted one of Bill Graham's security men

They were arrested, bailed, and later received probation, much to Bill Graham's chagrin.
10. Led Zeppelin's fourth, untitled album only hit Number 2 in the U.S.

Another irony is that "Stairway To Heaven" was never released as a single.
11. What was the working title for "Kashmir"?

This was one of their best songs and was on their "Physical Graffiti" double CD.
12. Which of these songs did Led Zeppelin never perform live?

This was one of the few songs the group never liked, although it was a favorite of many of their fans.
13. What was the name of their post-released 1982 album that included previously unreleased material?

This had many great hits, such as "Wearing And Tearing" and "Ozone Baby".
14. "Houses Of The Holy" was the title track of their fifth album.

It was intended for the "Houses Of The Holy" album but was later released on "Physical Graffiti".
15. What song did Robert Plant write in memory of his son, Karac?


Answer: All My Love

Karac Plant died of a stomach infection in July, 1977. Led Zeppelin went on a 18-month hiatus while Robert mourned with his family. "All My Love" was on their comeback, and final, album, "In Through The Out Door".
Source: Author diamondjim68 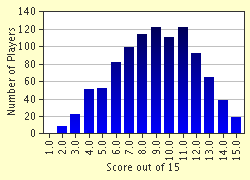