Here's a quiz on the founder and rhythm guitarist of the greatest rock 'n' roll band in the history of time, AC/DC.

Quiz Answer Key and Fun Facts
1. When was Malcolm born?

Malcolm was born on January 6, 1953 in Glasgow, Scotland.
2. How old was Malcolm when his family moved to Australia?

Malcolm was 10 years old when the family moved to Australia, where several years later, AC/DC would be formed.
3. What type of guitar does Malcolm play?

Malcolm has been playing his battered old Gretsch for many years. He plays a '63 G-1910 Firebird.
4. What did Malcolm do before venturing into music?

Malcolm worked for a bra company as a machine maintenance engineer immediately after leaving school.
5. What was one band Malcolm played with before forming AC/DC?

Malcolm played with Australia's "Velvet Underground" for a few years before teaming up with Angus to form AC/DC.
6. Who was Malcolm's mentor and guitar coach?

Malcolm often says that his eldest brother George gave him pointers on playing, and steered the band in the right direction. George also helped out by producing a few of AC/DC's albums. Angus says that Chuck Berry was his guiding light (i.e. Duck Walk).
7. How did the Marcus Hook Roll Band have a profound effect on Malcolm?

Malcolm was appalled at how the "Marcus Hook Roll Band" recorded individual instrument tracks, then dubbed them over top of each other, and decided that AC/DC would never record like that.
8. Where did Malcolm's new band perform their very first live gig?

AC/DC first performed live at a small Sydney club called "Chequers". They played a set of covers of the Rolling Stones, Chuck Berry, and the Beatles.
9. Has Malcolm ever sung on an album or during a live concert?

Of course, Malcolm sings backup along with bassist Cliff Williams in almost every AC/DC track.
10. How many brothers does Malcolm have?

There were eight Young children: seven boys and one girl.
Source: Author DelGriffith 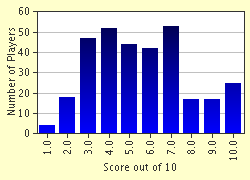 
Other Destinations
Explore Other Quizzes by DelGriffith