This is about AC/DC's third released album, "High Voltage". Keep in mind this is NOT the Australian version.

Quiz Answer Key and Fun Facts
1. The producers for this album were George Young (Angus and Malcolm's brother) and Harry Vanda. What band were these people from?

Fraternity is the band Bon Scott was in before AC/DC.
2. "T.N.T." is the fifth song on the album. What do the letters stand for?

I thought it meant nothing until I asked my parents.
3. What design is on Angus' hat on the cover?

The chorus is this:
"Little lover, I can't get you off my mind (no)
Little lover, I've been trying hard to find
Someone like you".
5. Phil Rudd broke his thumb while recording, so who replaced him?


Answer: he didn't break his thumb for this album

He didn't break his thumb while recording this album, but he did during a concert once. Harry Vanda was the Easybeats drummer, Colin Burgess was the first AC/DC drummer, but didn't come back, and Dave Evans didn't come back either.
6. Which date was this album released?

Sept. '76 was the date the Australian verson of "Dirty Deeds Done Dirt Cheap" was released.
7. What song is this from: "Well I worked real hard and bought myself A rock 'n' roll guitar I gotta be on top some day I wanna be a star I can see my name in lights And I can see the queue I got the devil in my blood Tellin' me what to do (And I'm all ears)"?

First verse of "Live Wire", which is:
"Well if you're lookin' for trouble
I'm the man to see
If you're lookin' for satisfaction
I'm satisfaction guaranteed
I'm as cool as a body on ice
Or hotter than a rollin' dice
Send you to heaven
Take you to hell
I ain't foolin'
Can't you tell".
9. Which extra instrument is used in "It's a Long Way To the Top (If You Wanna Rock 'n' Roll)"?

I was suprised, but Angus, Malcolm and Bon were all Scottish.
10. In "Little Lover", what popular drink was NOT the wet patch on the seat of the car?

Part of the first verse, which is:
"Saw you in the front row
Moving to the beat
(Just movin' and groovin')
Killed me when I saw
The wet patch on your seat
(Wasn't Coca Cola)
Oh baby
I hope you liked the show
When the band said good night
I had to say hello".
Source: Author thekillerz 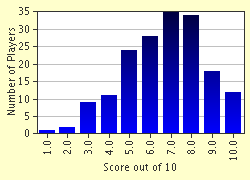 
Other Destinations
Explore Other Quizzes by thekillerz