Brian Johnson famously took over as the front man of rock band AC/DC after Bon Scott passed away. How much do you know about the 'man under the cap' and his predecessor?

Quiz Answer Key and Fun Facts
1. Brian Johnson was born on Tyneside in the north of England, but is only half English. Where was his mother born?

Alan Johnson served in the British Army, and later worked as a coal miner; a common job in north east England at the time. Ester Johnson was born in Frascati, Italy, and they had four children, including Brian who was born in 1947.
2. What was Bon Scott's full name?

His parents were Charles Belford and Isabelle Scott. When Bon started school in Melbourne, there was another Ronald in the class; Bon was "rechristened" with his nickname and it stuck.
3. Which glam rock band did Brian Johnson found in 1972?

Geordie released four singles in the UK, and the most successful of these, "All Because of You", reached number six in the UK Singles Chart in 1973.
The band split up in 1976, but reformed in 1980, just before Brian was offered the job of singer with AC/DC.
4. Why was Bon Scott rejected when he tried to join the Australian army?


Answer: He had a criminal record and was "socially maladjusted"

As a teenager, Bon got into trouble with the police for minor offences including petty theft and absconding from custody. This record was bad enough to keep him from joining the army.
5. One of the two videos made for a particular AC/DC song was filmed in Brian Johnson's home town in north east England. Which song was this?


Answer: You Shook Me All Night Long

The video, filmed in Gateshead on Tyneside, has been controversial over the years for it's "bad taste" content, although a version was edited to remove some of the "worst" shots. During making of the video, one of the extras was stabbed in the leg with a spur. She later married one of the band's roadies who she met when he came to her assistance.
"You Shook Me All Night Long" went into the Top 40 on the US Billboard Top 100 singles chart, and also reached number 38 on the UK Singles Chart in 1980.
6. With which band did Bon Scott release the albums "Flaming Galah" and "Livestock" in the early 1970s?

Fraternity formed in 1970, and through their career were also known as Fang, Some Dream, and Mickey Finn. They released "Livestock" in 1971, and "Flaming Galah" in 1972. Their third and final album was "Mickey Finn", released in 1980, shortly before the group broke up for the final time.
Bon Scott was a member of Fraternity from 1971 until he joined AC/DC in 1974.
7. In a TV interview with Jeremy Clarkson, on the motoring show "Top Gear", Brian Johnson said that his favourite toy as a child was one his father made for him. What was it?


Answer: Steering wheel for his bed

"Top Gear" is a motoring show, so the interview turned to cars, and Brian told how when he was a young boy, his father got an old steering wheel from a scrap car and fixed it to the foot of Brian's bed. He said in the interview that he spent hours playing with it, imagining all the places he could drive to when he was older. Brian is known for his collection of expensive cars now that he is able to indulge himself.
Even though Brian is one of the most famous rock stars in the world, his family lead very quiet lives away from the spotlight. His father died during AC/DC's "Ball Breaker" tour, but he lived long enough to see Brian's success in the music business. During the same interview, Brian said that his father was one of the biggest influences on his life, and all he ever wanted was to make him proud.

After a night out at a club in Camden Town in London, a friend left Bon to "sleep it off" in a car parked on a London street. The next morning, he was dead. The official cause of death was "alcohol poisoning" and the Coroner returned a verdict of "death by misadventure".
9. Bon Scott was in a band named Fang who were the support act for a band with Brian Johnson as the lead singer?

Fang were one of the incarnations of Fraternity, and they toured England in 1971. During this tour they appeared as the support band for both Brian Johnson's band Geordie and Status Quo.
10. Which was the first AC/DC album to feature Brian Johnson's vocals, after the untimely death of Bon Scott?


Answer: Back in Black

"Back in Black" (1980) was the second best selling album of the twentieth century. Only "Thriller" by Michael Jackson outsold it. The album has appeared on many bestseller and "best album" lists over the years, including being ranked number twenty six on "Rolling Stone" magazine's "100 Greatest Albums of the 80s" and number nine on "Q" magazine's "Best 40 Albums of the 80s" list.
After its release the album spent 131 consecutive weeks on the US Billboard Charts.
Source: Author Rowena8482 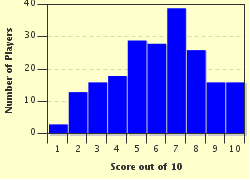 Related Quizzes
This quiz is part of series Commission #16:

One word is all it takes! This Commission simply looks at quizzes with one-word titles, and you may find you have a lot more to say about them. This Commission was launched in the Author's Lounge in April 2011.