AC/DC Tracks and Albums In Other Words Quiz

This is an "In Other Words" quiz on AC/DC track and album names. Good Luck!


Answer: Back In Black

This is the album that many consider the band's breakthrough album. It is one of the top ten best selling albums of all time, and it was Brian Johnson's debut album. Most also consider it to be their best album, but I beg to differ...
2. Malicious Acts that Can Be Performed at a Very Affordable Rate

This was one of Bon Scott's hits. It is also performed on "Live." Angus finishes with a screech similarly to the one in "The Jack."
3. Road to Satan's Domain

This is another one of AC/DC's top hits that is on the radio frequently. This album was Bon Scott's swan song, ironically enough. This album also helped to popularize the belief that the members of AC/DC are satanists.
4. Praise the Roman Leader

This was off the "Ballbreaker" album released in 1995. It was one of the more catchy tunes on this album. It has an interesting music video with clips from old Caesar films.
5. Issue Kid

This song is off the "Highway to Hell" album as well. It wasn't one of their biggest hits, but it's got a nice tune. It was one of their slower songs. It was also the last album of the late Ronald "Bon" Scott.
7. Alcoholic Beverage Amongst Ice


Answer: Whiskey on the Rocks

This one was from "Ballbreaker" as well. "Ballbreaker" was a darker sounding album than one would expect from AC/DC, but it turned out well.
8. Anxious Extortion

This one came from "Flick of the Switch" too. It's not a well known track, but it has a nice main riff.
10. Canine Consume Canine

"Dog Eat Dog" was an early track of theirs. It's about the rough ways of business, probably relating to the band's new foray into record deals. It was from the "Let There Be Rock" album.
11. Drown the Light Red

"Sink the Pink" was on "Who Made Who" and the "Fly on the Wall" albums. It was released on "Who Made Who" (soundtrack) as filler because it was composed of three original recordings and a few hits from old albums, making up the full soundtrack of the motion picture "Maximum Overdrive". It was another AC/DC song that did not lack innuendo.
12. Rigid Higher Mouth Part

This is the title track to the 2000 album "Stiff Upper Lip." There was also a concert DVD that was released from the "Stiff Upper Lip" tour from a major concert in Olympiastadium in Munich. The Angus Statue was the icon of this album in the same way the the Hells Bell was for "Back in Black", and the cannon(s) was for "For Those About to Rock."
13. Demolish Your Form of Visual Entertainment


Answer: Blow Up Your Video

"Blow Up Your Video" was released in early 1988. For the next three studio albums, "The Razor's Edge", "Ballbreaker", and "Stiff Upper Lip" chronologically, Brian Johnson did not write lyrics, for the first time in his AC/DC career.
14. Hazard

This was from the "Fly on the Wall" album. The album had a music video featuring five of the album's songs. It was played in a hole in the wall kind of bar, and events happened inside the bar that went with the lyrics. This music video, among others, can be found on the "Family Jewels" DVD and older VHS tapes.
15. Cash Speaks

That was a bit of an easy one, huh? This was from "The Razor's Edge." It was also performed on "Live", which was entirely recorded on the "The Razor's Edge" tour. Thanks for taking my quiz! I've got another AC/DC quiz in the AC/DC section if you are interested!
Source: Author Clayfrd 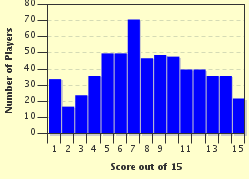 
Other Destinations
Explore Other Quizzes by Clayfrd