A quiz all about one of the greatest bands ever, AC/DC.

Quiz Answer Key and Fun Facts
1. "Big Gun" was a song written for the movie "Last Action Hero"; who appeared in its music video?

Yep, Arnie is in fact a huge fan of AC/DC, so are Stephen King, Tony Blair, Shania Twain, and many many others.
2. Who is the only original member?

Yes Angus and Malcolm, were the very first members of AC/DC, and are the only two original members.
3. AC/DC broke ground with the album, "Back In Black." The all black cover was a silent tribute to whom?

This was right after Bon Scott had died, that's when AC/DC went back into the studio and put together one of the highest selling albums of all time.
4. In "Maxim" Magazine's poll, what was Angus Young voted?

He is just under 5'2, the smallest man in rock.
5. According to an interview with "The Story Of" show, where did Angus get his amazing on-stage antics?


Answer: He fell accidentally one night playing a pre AC/DCshow

Angus and his band were playing a show, and they were horrible. (can you believe it?) Angus tripped over a guitar cord, and yelled with pain, all while playing, and the crowd went wild.
6. Finish the lyric, "she was a fast machine, she kept her motor clean, she was the best damn" what?


Answer: woman that I've ever seen

Haha, straight out of "You Shook Me All Night Long" an amazing song off of the "Back In Black" album.
7. Do AC/DC have any live albums?

"The Razor's Edge"! an amazing album, this is the album where Angus and Malcolm wrote the lyrics. Usually it was Brian Johnson.
10. In the February 2005 issue of "Guitar World", what was Malcolm Young voted?

That's right, Malcolm is a very exceptional and accomplished guitarist. Angus has been quotted as saying that Malcolm is a better guitarist than he is.
Source: Author jnitrous 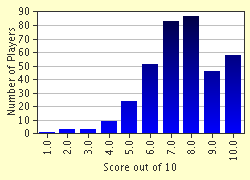 
Other Destinations
Explore Other Quizzes by jnitrous