This quiz is for the hardcore fans of the Rolling Stones. You will probably know some of the answers if you're a fan. If you're not a fan, all I can say is good luck.

Quiz Answer Key and Fun Facts
1. What did the original first cover of the 1968 release "Beggars Banquet" show?

The record company didn't want to show the toilet because they thought it was offensive. So the Stones made a the dinner card sleeve instead. In 1984, when the London label released The Stones' sixties discography on CD, the toilet was on the cover for the first time.
2. Mick Jagger's real name is Mick Philippe Jagger?

His real name is Michael Philip Jagger.
3. What is the name of Keith Richards' parents?

In an interview from the late sixties Keith, when asked what his parents names were, said: Boris and Dirt... Ummm.... Doris and Bert.
4. On the "A Bigger Bang" tour (2006), where was the last place The Rolling Stones played in Europe?

Gothenburg was cancelled due to Keith Richards' fall from a coconut tree in the summer of 2006. Bergen and Horsens was postponed until the September 1st and 3rd respectfully.
5. What was the name of Ronnie Wood's first band?

"Jump Back" was released after Bill Wyman's departure to keep the interest for the Stones high. A year later they released "Voodoo Lounge" and went on a tour that became the highest grossing tour of all time.
7. Name the album The Rolling Stones released in 1997.

This wasn't a great seller for The Stones, but it was a great, critically acclaimed album nonetheless.
8. Where does Mick Jagger always celebrate New Year's Eve?

Mick Jagger always flies to the Island of Mustique for New Year's Eve. He brings his whole family. According to himself, it has become tradition.
9. Who makes the stages for The Rolling Stones' massive world tours?

Mark Fisher Stage Design Co. has made The Rolling Stones' stages since 1989. He even makes them today. In the Rolling Stones documentary/concert film "Four Flicks" you can see him discussing the stage with Mick Jagger and Charlie Watts.
10. Which song by The Rolling Stones has featured in 3 movies by Martin Scorsese?

"Gimme Shelter" was featured in "Casino", "Goodfellas" and "The Departed".
Source: Author RollingStones 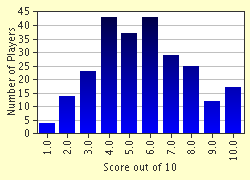 
Other Destinations
Explore Other Quizzes by RollingStones