Hi I would like to ask some random Nirvana questions to test how much you know.

They finally settled on Nirvana in early 1988. Kurt choose it because he didn't want a mean sounding name.
3. How many albums (not including compilation albums or albums featuring Nirvana) were released when Kurt was alive?

Only three albums were released when Cobain was alive including "Bleach", "Nevermind" and "In Utero". "Incesticide" is a compilation album and the "Unplugged In New York" album was released in November of 1994.
4. On what album was the song "Spank Thru" first released?

It was first released in 1988 on the compilation album "Sub Pop 200". There were many other first releases on the album including Soundgarden's "Sub Pop Rock City" and Mudhoney's "The Rose".
5. Kurt used Kool-Aid to dye his hair.

It is true he dyed his hair red around the same time as "Nevermind" was being recorded. You can see it slightly in some of the pictures in the "Nevermind" album sleeve.
6. The song "About A Girl" was about who?

It was about Tracy Marander who was Kurt's then-girlfriend. Tracy asked Kurt why he hadn't written any songs about her. Kurt never told her that the song was about her she only found out when she read "Come as You Are: The Story of Nirvana".
7. Nirvana's first album "Bleach" was going to be called "Too Many Humans"?

It was renamed "Bleach" after Kurt saw a poster about AIDS which told drug users to bleach their works.
8. "Gallons of Rubbing Alcohol Flow Through the Strip" is a secret song at the end of some copies of "Nevermind".

"Gallons of Rubbing Alcohol Flow Through the Strip" is a secret song at the end of the "In Utero" album but it is only included on non-US pressings of the album.
9. Nirvana's song "Rape Me" was renamed "Waif Me" for Wal-Mart and Kmart stores.

This was changed because these major department stores found the actual title too controversial.
10. On Kurt's 14th birthday his uncle offered to buy him either a bicycle or what other item?

He gave him a choice of a bicycle or a guitar and Kurt choose a guitar. Kurt first started to learn how to play covers of songs before writing his own songs.
Source: Author clasonic13 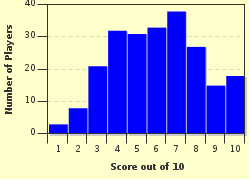 
Other Destinations
Explore Other Quizzes by clasonic13