Rolling with The Stones Trivia Quiz

A quiz about the songs, albums, and members of my favorite band ever, The Rolling Stones. Have fun!

Quiz Answer Key and Fun Facts
1. What three Rolling Stones lived together in a filthy London apartment for a while before the band became internationally famous?

The young musicians lived together in 1962 in an unheated, dirty apartment. To survive they stole food and raided their neighbor's apartment after parties, trading the empty beer bottles for money.
2. Who was the oddball manager of the Stones during the mid-1960s?

Oldham cast the Stones as "anti-Beatles", having them appear as hoodlums in contrast to the Beatles' clean-cut image. He was also the person who persuaded Keith Richards and Mick Jagger to write their own songs, locking them in a room on one occasion and not letting them out until they had written something.
3. What Rolling Stones song did Beatle John Lennon once describe as the greatest composition of the 20th century?

"Paint it, Black" was a number one hit for the Stones in 1966. It's a fine song but- greatest of the 20th century? I think not.
4. How did Rolling Stones founder and guitarist Brian Jones die?


Answer: drowned in his swimming pool

Jones died in his pool on July 3, 1969. The fact that he was a very strong swimmer sparked speculation as to whether or not he was murdered by jealous boyfriends of Rolling Stones groupies, but that has never been proven.
5. What Rolling Stones album was released five months after the death of Brian Jones?

"Let it Bleed" was released in December, 1969. It is widely hailed as the band's finest effort. With Jones absent for most of the recording, almost all of the guitar work was left to Keith Richards. Keith put his stamp of guitar excellence on this record with his brilliant writing and playing.
6. Which of these songs contains this line? "Put my fist through your steel plate door."

"Midnight Rambler" can be found on the "Let it Bleed" album. A fantastic live version of the song appears on "Get Yer Ya-Ya's Out" (1970).
7. In what country was Keith Richards arrested for possession of heroin and cocaine in 1977?

Richards was arrested in Toronto in March. Because of the large quantity of drugs in his possession, he faced a possible sentence of life in prison. Instead he received a one-year suspended sentence, was ordered to undergo heroin rehabilitation in the United States and give a benefit concert performance for the blind.

A young blind woman had testified in court, explaining how Richards had made sure she was returned home safely after a Stones concert.
8. What song does this lyric come from? "I been walkin' Central Park, singin' after dark. People think I'm crazy!"

This is the first song from 1978's "Some Girls".
9. Beside Keith Richards and Mick Jagger, three band members have received writing credit for a Rolling Stones-written song. Ron Wood and Bill Wyman are two of them- who was the other?

Despite their crucial input into many songs, neither Jones nor Watts ever received a writing credit. Chuck Berry, of course, was never a member of the Stones, though some, including Keith, might say he wrote a lot of those early Keith Richards licks!
10. Who was the Rolling Stones' long-time friend, part-time piano player/road manager, and full-time father figure that died in 1985? 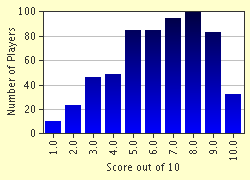