There are 15 questions in this Quiz. Test your Spice Girls knowledge!

Quiz Answer Key and Fun Facts
1. Who was not an original member of the Spice Girls?

Emma Bunton replaced Michelle Stephenson, who left the group, citing that she didn't fit in with the other girls.
2. Who was first to leave the group?

Geri left, citing "differences between themselves".
3. Who is Ginger Spice?

In the "Say You'll Be There" video, her alias is "Trixie Firecracker".
4. Which newspaper announced the Spice Girls audition?

5. Which of these pairs shared a room at their house?

Victoria and Emma shared a room, the two Melanies shared a room, and Geri stayed in the smallest room.
6. Who was seen kissing Jade from the group Damage?

They seemed very much in love.
7. Which Spice Girl was the second to give birth?

Victoria gave birth only thirteen days after Melanie B!
8. What is Melanie B's first child named?

9. What is the name of Melanie B's first husband?

Jimmy was one of the Spice Boys.
10. What song did they USUALLY start concerts with?


Answer: If You Can't Dance

It never happened.
13. What title did Geri take on after she left the Spice Girls?

She later became a solo artist.
14. Who sang a duet with Missy Elliott?

That's all for this quiz... GIRL POWER!
Source: Author mew 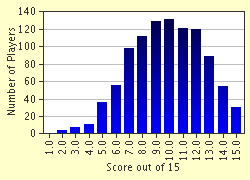 
Other Destinations
Explore Other Quizzes by mew