Welcome to the Hotel California! Quiz

Quiz Answer Key and Fun Facts
1. Alright, so we've got this guy. He's on a dark desert highway, there's cool wind in his hair. He smells the warm smell of colitas rising up through the air. And then, up ahead in the distance he sees what kind of light?

The song starts out by saying "On a dark desert highway, cool wind in my hair. Warm smell of colitas rising up through the air. Up ahead in the distance, I saw a shimmering light. My head grew heavy and my sight grew dim. I had to stop for the night." I have never heard of "colitas" being referenced to outside of the lyrics of this song. Make sure you've got it spelled right, though. "Colitis" is an inflammation of the colon. Yeah, that's lovely.
2. His head is growing heavy, his sight's growing dim; he just has to stop for the night. There she's standing in the doorway and he hears this bell. What kind of bell?

"There she stood in the doorway, I heard the mission bell." The Eagles first hit #1 with "Hotel California" in 1977.
3. So he's standing there, right? Then he starts to think this could be ______ or this could be ____. What two contrasting ideas does he ponder?

"And I was thinking to myself, 'This could be heaven or this could be hell.'" Did you know the drummer of the Eagles was Don Henley? I had no idea. Maybe I'm just not on top of this like I should be. =P
4. What does the woman light up?

"Then she lit up a candle and she showed me the way." The Eagles were inducted into the Rock and Roll Hall of Fame in 1998. Cool, huh?
5. Then he thinks he hears these voices in the corridor. They're saying something like "Welcome to the Hotel California. Such a ______ place, such a lovely face..." What do the voices think about the Hotel California?


Answer: They think it's lovely

"Her mind is Tiffany-twisted, she got the Mercedes..." And here is the point where I get confused. For as long as I can remember, I could have sworn he was saying "Mercedes Benz". Now I've got some sources telling me that it's really "Mercedes bends". Maybe it just depends on how you look at it.
8. She's also got a lot of pretty, pretty boys that she calls "friends". Yeah right. They like to dance in the courtyard and it sounds to me like they enjoy the "sweet summer sweat". Some dance to ________ and then you've got those that dance to ______. Why do these groups of people dance in the courtyard with their sweet summer sweat?

"She got a lot of pretty, pretty boys that she calls friends. How they dance in the courtyard, sweet summer sweat. Some dance to remember, some dance to forget."
9. So while they're all out dancing, who does he call up?


Answer: He asks for the captain to please bring him his wine

"...please bring me my wine." I wonder what the captain was doing with his wine in the first place.
11. The captain then replies "we haven't had that spirit here since ____." What year did they last have that spirit here?


Answer: in the middle of the night

"And still those voices are calling from far away. Wake you up in the middle of the night, just to hear them say..." During the Eagles' 10 year career, they had sold over 80 million albums worldwide.
13. Jeez, these voices are rude. They wake you up just to hear them say "Welcome to the Hotel Califonia. Such a lovely place, such a lovely face. They're livin' it up at the Hotel California. What a nice surprise, bring your..." What do the voices tell you to bring?

"Mirrors on the ceiling..." Maybe there was a fan too. That wasn't included in the description =P.
15. And there's also this alcoholic beverage on ice, but a specific color. What color and what beverage?

"...Pink champagne on ice..." Red, red wine? Another song, another quiz...
16. Then the woman with all her pretty, pretty boys tells the guy that they are all just prisoners there of their own device. They all go to someone's chambers to gather for this feast they're having. What kind of chambers?

"And she said 'we are all just prisoners here of our own device.' And in master's chambers, they gathered for the feast..." In 1994, the band reunited for a stadium tour and to release a new album, "Hell Freezes Over."
17. Then they all start stabbing this beast with their knives. What kind of knives were they?

"...they stab it with their steely knives, but they just can't kill the beast." I really like this lyric. I don't understand exactly what it means, but hey! That's not a requirement for appreciation.
18. So they're all just hacking this poor beast to death...too bad, they just can't kill it. The last thing this guy remembers, he was running for the door. He just has to find the _______ back to the place he was before. What leads back to the place he was before?

"Last thing I remember, I was running for the door. I had to find the passage back to the place I was before." The Eagles' album sales totalled over 83.5 million dollars!
19. Then this other guy tells him to relax and they are "programmed to receive." I'm sure that really helps. Who tells him to relax?

"'Relax', said the nightman. 'We are programmed to receive...'" Their 83.5+ million dollar career led them to become the third top-selling band of all time, behind the Beatles and Led Zeppelin.
20. And, as if this whole ordeal weren't enough to scar this poor guy for life, the "relax" man is now telling him that he can check out anytime he likes, but he can never do what?

"...You can check out anytime you like, but you can never leave!" This is without a doubt my favorite line in the entire song. The Eagles are such talented musicians and songwriters!
Source: Author sassy111 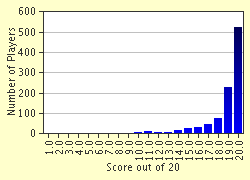 Everything from geography to history to bands and songs that happen to share a name with the state.


Other Destinations
Explore Other Quizzes by sassy111