This is a very hard Westlife quiz for real fans! Everything from singles to quotes!

Quiz Answer Key and Fun Facts
1. Which Westlife song was released in the UK on the 18th of October 1999?

This was Westlife's third single and went to number 1. It was written by Steve Mac and Wayne Hector.
2. What is the next lyric? "She didn't need no diamond rings, fancy cars ... "


Answer: Versace things to please her

This song was written by Mark, Nicky, and Kian, and features on the "World of our Own" album.
3. Which of these is not one of Shane's sisters?

Shane comes from a large family with three brothers and three sisters.
His brothers are called Finbarr, Peter, and Liam.
4. What was the first ever Westlife UK tour called?

This tour kicked off on the 9th February 2001 in the Telewest Arena Newcastle.
5. Shane has designed his own home for him and Gillian in France.

Shane has designed his own home but it's in Sligo, Ireland! He has also designed a house for his parents.
6. Nicky's partner's father has served as the Prime Minister of Ireland. What is his name?

Nicky and Georgina have been together since their school days and went on their first date the day before his 16th birthday.
7. In which video did Shane ride a horse?

This is from the song "Can't Lose What You Never Had" from their first album.
9. Who wrote the "Westlife on Tour" book?

This book was published in 2001 and is the story of the boys' first tour.
10. Kian once kicked Anto (the tour manager) in an airport because Anto jokingly stole Kian's new Rolex watch.

This happened at London's Heathrow Airport, and the watch cost Ł5,000. The rest of Westlife tried to calm him down, but Kian was furious.
11. When was Bryan's first child Molly born?

Five months after she was born, Bryan and Kerry got married and sold their pictures to a famous magazine.
12. Who said this? "Every time I drive up to it, I just can't believe I'm living in a house this big"

Bryan is talking about the house he bought with his wife Kerry.
13. Which member can speak some German?

He knows a few German phrases, which he learned at school.
14. Nicky had to stop playing professional football because he broke his leg and damaged his ligaments.

He says this on a special feature on the 2001 tour video/DVD.
Source: Author annieb1 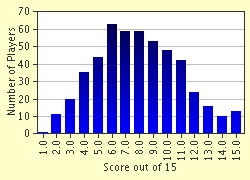 
Other Destinations
Explore Other Quizzes by annieb1