You Only Wish You Were This Cool Quiz

Here is a list of 10 questions that proves Tori Amos is the coolest person on the planet.

Share on Facebook
Share on Twitter
Share by E-Mail
Author
disarmedreamer
Time
3 mins
Type
Multiple Choice
Quiz #
188,798
Updated
Dec 03 21
# Qns
10
Difficulty
Easy
Avg Score
8 / 10
Plays
475
This quiz has 2 formats: you can play it as a or as shown below.
Scroll down to the bottom for the answer key.

Quiz Answer Key and Fun Facts
1. She writes great lyrics, like this one: "If you're a thought, you would want me to think you, and I did." What song is this line from?

"Scarlet's Walk" is from the 2002 album of the same name.
2. She's very talented at playing piano, but that's not all she plays. What other classical instrument has Tori played on albums?

She's one of the only people in rock music today that I've heard use a harpsichord. It has a different sound than the piano because the strings on it are plucked instead of struck. She uses the harpsichord a lot on "Boys for Pele". It can be heard on the songs "Blood Roses" and "Caught a Lite Sneeze" to name a few.
3. She's beautiful! Even after having her first child, she still has an amazing figure. What is her first-born child's name?

Although she'd miscarried before, Natasha Lorien is her first baby. She was born in 2000.
4. She got this famous rock star to do backing vocals for her! (Not a duet, backing vocals!)

That's right, the Nine Inch Nails frontman can be heard singing on "Past the Mission" (from "Under the Pink"). She also refers to NIN in several of her songs including "Precious Things" ("with their nine inch nails"...) and "Caught a Lite Sneeze" ("made my own 'Pretty Hate Machine'").
5. Many people know that Tori mentions Neil Gaiman in a lot of her songs (e.g. "Carbon", "Horses", "Tear in Your Hand"), but did you know that he has drawn a character resembling her? And do you know that character's name?

Delirium appears in the "Sandman Series" by Mr. Gaiman.
6. She got this hot actor to co-star with her in one of her videos. What is his name?

Adrien Brody appears in the video for "A Sorta Fairytale".
7. She does great covers! In fact, she did a whole CD of covers called "Strange Little Girls". Which of the following groups was not covered on this CD?

Depeche Mode's "Enjoy the Silence", The Velvet Underground's "New Age", and The Stranglers's "Strange Little Girl" were all coverd on "Strange Little Girls". She has coverd the Cure's "Love Song", but it did not appear on this album.
8. She has amazing album artwork. On the "Boys for Pele" sleeve, in one of the pictures, she appears to be breast-feeding a baby animal. What kind of animal?

The whole album sleeve is full of intersting pictures. The cover is a picture of her sitting in a rocking chair holding a gun.
9. Tori's organization has put out calendars that feature different artist's drawings/paintings of her. What is the name of her organization?

R.A.I.N.N. stands for the Rape Abuse & Incest National Network. She started this organization after she herself was raped. You can find out more about the organization and the calendars at www.rainn.org.
10. She sings beautifully! Can you finish this line that her beautiful voice sings? "And I won't say, that he shouldn't have paid, but Mama..."


Answer: it wasn't my bullet.

This line is from the song "Little Amsterdam".
Source: Author disarmedreamer

This quiz was reviewed by FunTrivia editor ralzzz before going online.
Any errors found in FunTrivia content are routinely corrected through our feedback system.
Most Recent Scores
Jan 10 2023 : Guest 76: 8/10
Dec 25 2022 : Guest 89: 10/10 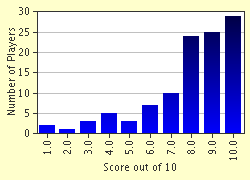 
Other Destinations
Explore Other Quizzes by disarmedreamer