Ever notice how often Tori sings about colors? Hope you've been paying attention, because here's a quiz about those lines.

Share on Facebook
Share on Twitter
Share by E-Mail
Author
sophia_jr
Time
6 mins
Type
Multiple Choice
Quiz #
147,015
Updated
Dec 03 21
# Qns
25
Difficulty
Average
Avg Score
17 / 25
Plays
1165
This quiz has 2 formats: you can play it as a or as shown below.
Scroll down to the bottom for the answer key.

Quiz Answer Key and Fun Facts
1. This line belongs to which song: "Black winged roses that safely change their color"?

This is from the B-side "Take to the Sky" which appeared on the "Winter" US Limited Edition single and the UK "Winter" (Part 1) single. When Tori registered this song with the Library of Congress in 1990, the title of the song was "Russia".
3. From which song does this line originate: "Mother Mary/china white/brown may be sweeter"

This is from the song "Precious Things" on the "Little Earthquakes" album.
5. From what song does this line originate: "The Red Road carved up by Sharp Knife"

The line is part of the counterpoint near the end of the song. The song appears on the 2002 album "Scarlet's Walk".
6. Fill in the missing color: "and the _____ clouds raining in my head"

This is from "Silent All These Years" on the "Little Earthquakes" album.
7. What "famous" and colorful song written by Leonard Cohen did Tori cover in 1994?

It appears on "Tower of Song: Songs of Leonard Cohen", UK "Glory of the 80s" (Part 1) single, and US "Concertina" single. It is a magnificent cover of an amazing song.
8. From what song did the following line originate: "little green men do o.k."

"it's the fairies' revenge they say" goes the next line.

This song was featured on UK "Pretty Good Year" (Part 2) single and the US "Past the Mission" cassingle.
9. What color does the "world bleed" in "Carbon"?

"Carbon" appears on "Scarlet's Walk".
10. Tori collaborated with trance/dance musician BT to make the single "Blue Skies". The song was released on the soundtrack of what long forgotten tv show for teens?

It was also released on BT's album titled "Ima" (UK).
11. In what song does Tori sing the following line: "or does this little blue ball just fade away" ?

This song appears on "To Venus and Back". Tori wrote it for her husband when his father died.
12. From which song does the following line originate: "Hola, rojo, 'morning to you"?

This song is featured on the UK "A Sorta Fairytale" single. "Operation Peter Pan spanned from 1960-62 whereby over 14,000 children were sent away from their families in Cuba, some never to reunite again. Pan Am flights took the children to Miami, Fl, "Never-Never Land", and the children became known as the "Peter Pans." I wrote this song for my daughter, and it is sung for all the daughters and mothers, fathers and brothers who felt this pain of separation all because of governments and their politics."
-- Tori Amos; UK A Sorta Fairytale Single.
And, of course, "rojo" means red.
13. What color was the monkey that was "down at Bobby's house"?

This song is about Tori's daughter Natashya Lorien, who was born in September 2000.
15. What song includes the line: "paint them toes the reddish color"?

This is the cutest song and it appears on the UK "Talula" (Part 2)single and the US "Talula" single.
16. Tori has covered "Heart of Gold" by Neil Young?

Yep...it's on her album of covers called "Strange Little Girls". It is an amazing version of this song. She really wakes up this tired classic.
17. What color is the dress that Tori wants to give away in her song "Black Dove (January)"?

This is on "From the Choir Girl Hotel".
18. What song can be heard on "To Venus and Back--Still Orbiting" and begins with the line "Well hey do you do judo"?

This is a fantastic song. It can also be found on UK "Spark" (Part 1) single and US "Spark" single.
19. "You know that apple green ice cream can melt in your hands" is a line from which song?

This beautiful song can be found on UK "Crucify" (Part 1) single and UK "Past the Mission" (Part 2) single.
20. Which song?: "A lilac mess in your prom dress"

The song is "Strange" and the album is "Scarlet's Walk".
22. Name the song: "And I learn what black magic can do"

This also shows up on "From the Choir Girl Hotel".
23. What Tori song includes the word "sepia"? I promise that only one song contains this word.

I know...way too easy. This is from the song "Winter" which is on the "Little Earthquakes" album.
25. What is the only Tori album with a color in its title? (By the way, I don't count "Scarlet's Walk" as a color because Scarlet is used as a name.)


Answer: Under the Pink

This quiz was reviewed by FunTrivia editor Bruyere before going online.
Any errors found in FunTrivia content are routinely corrected through our feedback system.
Most Recent Scores
Jan 11 2023 : Guest 76: 21/25
Dec 25 2022 : Guest 89: 18/25 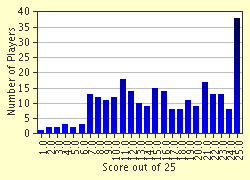 
Other Destinations
Explore Other Quizzes by sophia_jr