This quiz is about famous and not so famous British poisoners.

Quiz Answer Key and Fun Facts
1. Dr. Crippen - this was a case made famous because it was the first time a murderer was caught using what method?

Walter Dew, the officer who arrested Crippen, was also involved in the "Jack the Ripper" case in 1888.
2. What was the profession of Herbert Rowse Armstrong who was convicted for murder in 1922?

He was convicted for poisoning a rival solicitor. He used a box of chocolates.
3. This schoolboy was sent to Broadmoor Mental Hospital for poisoning his family in 1962, he was released in 1971, and poisoned again. What was his name?

His story is told in the movie, "The Young Poisoners Handbook."
4. Adelaide Bartlett was charged with the murder of her husband in 1886. What was she accused of using to murder him?

In the interest of science, she was asked how she administered the poison after being found not guilty.
5. Dr. Thomas Neill Cream gave his deadly pills to a particular group of people. What were they?

He was said to have shouted, "I'm Jack," just as the trapdoor opened to hang him.
6. Florence Maybrick used arsenic obtained from where to poison her husband?

James Maybrick is the latest suspect to have been Jack the Ripper after a diary was found in Liverpool supposedly written by him claiming to be Jack the Ripper.
7. What name did poisoner Jean-Pierre Vaquier use to sign the poison book in the chemist shop where he bought it?

He became known as the "Dapper Frenchman" at the Blue Anchor vanity and it seems to have been his downfall because of the way he dressed, the chemist recognized him.
8. Susan Barber used a household poison to murder her husband, what was it?

This was the first case involving Paraquat.
9. Which two people did Edward William Pritchard poison?

He was the last person to be publicly hanged in Scotland in 1865.
10. When she was released in 1904, Florence Maybrick published a book about her experiences. What was it called?

To her death, she always claimed that she was innocent.
Source: Author davewright909 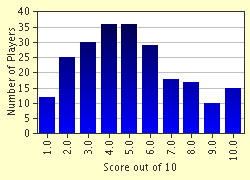 Related Quizzes
1. Murder Trials of the Century Average
2. Screw the Rules, I Have Money Easier
3. Scary Marys Average
4. Before They Were Infamous Average
5. Escapes From Alcatraz Very Difficult
6. America and the Death Penalty: 19th Century Tough
7. You Have The Right to Remain Tough
8. Executions in Britain Tough


Other Destinations
Explore Other Quizzes by davewright909