Intended for laypersons. A light quiz on the discoveries of famous scientists, moderately easy but varied. One answer from each question is for fun only. Enjoy!

The equation, which means "energy equals mass times the speed of light squared", shows that energy (E) and mass (m) are interchangeable; they are different forms of the same thing.
2. Roger Bacon is often called the 'Father of Modern Science' for what reason?


Answer: he wrote down his experiments

Recordkeeping remains the most important aspect of science. This allows others to examine, repeat, and build on what others have done.
3. In 1242 A.D., Roger Bacon discovered that black powder (gunpowder) would explode rather than simply burn if he did what?


Answer: confined it in a small space

Gunpowder burns when its solid components turn to gas in a chemical reaction. If the gas is confined, it will result in an explosion.
4. The Swedish scientist Alfred Nobel is most famous today for creating the Nobel Prize. What invention made him rich?

Nobel's discoveries harnessed the power of high explosives for use in industry and war. He was also a pacifist and so named the Nobel Peace Prize using the income he had earned as an industrialist.
5. In 1828, Friedrich Woehler performed the first chemical synthesis of a naturally occurring biologic (organic) molecule. What did he synthesize?

Before this, most scientists believed that biological chemicals could not be synthesized. With the synthesis of urea, organic chemistry was born.
6. In 1660, Robert Boyle discovered what revolutionary finding about gases?


Answer: the volume of a gas varies inversely with pressure

Although all of the answers above are more or less true, Boyle only discovered the volume - pressure relationship. Later, the combined gas law 'PV=nRT' was discovered.
7. The 19th century Russian chemist Dmitri Mendeleyev arranged cards that described all known chemical elements into what?


Answer: the Periodic Table of the Elements

The recognition of a pattern to the properties of chemical elements correctly predicted the existence of many yet undiscovered elements.
8. The German scientist Max Planck was the first to suggest that classical laws of physics did not always apply to atomic systems. By studying light of different frequencies, he proposed the existence of quanta that carried discrete but small amounts of what?

His revolutionary equation E=Hv (read v as 'nu') marked the birth of quantum physics. Quantum is the singular of quanta.
9. Around 300 B.C.E., Theophrastus, one of Aristotle's students, first described asbestos as 'a substance resembling rotting wood which, when doused with oil, would burn without being harmed.' Where does asbestos come from?

Asbestos was first mined by the ancient Greeks, until their mines ran dry. Medieval alchemists actually thought fire-resistant salamanders were the source, giving rise to an alternate name, 'salamandra.'
10. At the end of the 19th century, Fritz Haber first synthesized ammonia from nitrogen and hydrogen. This was important to the world population because:


Answer: It allowed the production of synthetic fertilizers

Nitrogen fertilizers have made possible a the dramatic increase in population density observed worldwide over the 20th century. Approximately one third of the protein in the world's diet currently relies on synthetic nitrogen fertilizer.
11. In 1775, Benjamin Franklin traveled from England to America on a sailing ship. He measured the temperature of the water with a thermometer at many points during the voyage and thus discovered a region of warm water due to what?

During this trip, he made the first map of the Gulf Stream, an ocean current that had confused sailors for many years.
12. The Scottish botanist Robert Brown first observed the process now known as Brownian movement in 1827. What is it?


Answer: the motion of small particles due to random collisions with solvent molecules

Just one of the many new things seen under the microscope around this time.
13. In 1858, Charles Darwin proposed what theory to explain the diversity of living things on earth?


Answer: the theory of natural selection

This scientifically verified principle is the basis of evolution. The importance of DNA would not be discovered for almost a century.
14. In 1803, John Dalton proposed that all substances are composed of small, dense, indestructible particles known as what?

The existence of atoms had been discussed philosophically by ancient Greeks, but Dalton's theory took scientific facts into account.
15. From carefully weighing the reactants and products of chemical reactions, the 18th century French chemist Antoine Lavoisier laid the groundwork for what fundamental scientific principle?

Lavoisier was executed by guillotine, a tragedy of the French revolution. The mathematician Joseph Lagrange said of his death, 'It required only a moment to sever that head, and perhaps a century will not be sufficient to produce another like it.'
16. In 1932, James Chadwick discovered what subatomic particle that contains mass but no charge?

17. Galileo's famous experiment at the leaning tower of Pisa demonstrated what about gravity?


Answer: acceleration is independent of mass

Prior to Galileo, it was believed that heavier objects fall faster than lighter ones.
18. The 'two body problem' was first solved by:

Newton used his new tool of calculus to derive and solve the equation describing the orbit of one body around another.
19. Why was Galileo excommunicated from the Catholic Church?


Answer: He said that the earth moves round the sun

At the time this was the standard Catholic view ... The Church finally pardoned Galileo in 1992.
20. Werner Heisenberg enunciated his 'uncertainty principle' in 1927. It states that:


Answer: The position and velocity of an electron cannot both be precisely determined 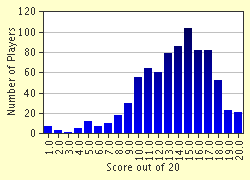 
Other Destinations
Explore Other Quizzes by dr_vitz